The Royal Trials (Last Gate of the Emperor #2) (Hardcover) 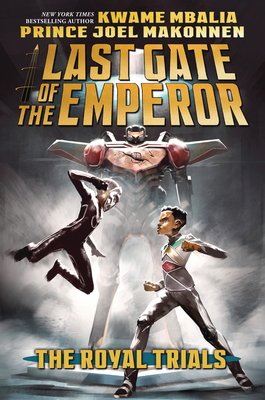 The Royal Trials (Last Gate of the Emperor #2) (Hardcover)


Coming Soon - Available for Pre-Order Now
From Kwame Mbalia and Prince Joel David Makonnen comes an Afrofuturist adventure about a mythical Ethiopian empire. Sci-fi and fantasy combine in this epic journey to the stars.

Yared has traveled a long way to find his place in the universe. Light years, even. Though the battle of Addis Prime is over, the spacefaring Axum Empire is still fractured. The kingdom once gave their technology away free of charge, to better humankind. Now, having been missing for over a decade, they’re returning to the planet where their galaxy-spanning civilization began—Earth.

But they find the planet in disarray. Old Earth’s atmosphere is a mess of junked shuttles and satellites. This is especially true of Debris Town, an orbital flotilla where poor spacefarers—left to rot by the Intergalactic Union that rose up in Axum’s place—have taken to piracy to survive.

Yared is set to speak at the opening of the Royal Trials, a competition of the best exo pilots in the Sol System. But on the day of his speech, the pirates launch an attack!

The siege sets off a chain of events that will lead Yared into the depths of Old Earth—and the jaws of a cruel betrayal. There’s more to the pirates—and Debris Town—than anyone saw coming.

Praise for Last Gate of the Emperor

"Inspired by the history and lore of Ethiopia, this cinematic space adventure introduces 12-year-old Yared Heywat as he fights to protect those he loves after learning stunning secrets about his world and himself … In this fast-paced, Afrofuturist homage to Ethiopia, Mbalia and Ethiopian prince Makonnen craft an enthralling tale of resilience, family, and bravery that will entertain young sci-fi lovers."

"Action-packed technothriller … Readers will delight in Yared’s puckish demeanor and perspective, his loyal bionic lioness, Besa, and the events that ensue as all of Yared’s childhood stories come to life in a terrifying way, from dangerous monsters to mysterious floating realms. In this vivid, volatile Afrofuturist sf world, as Yared journeys to learn about himself and his spiraling environment, he must figure out who to trust and how he is connected to all of the chaos."