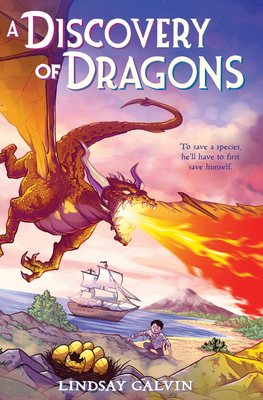 “This book is an epic adventure. Pulling history from the voyage of Charles Darwin aboard HMS Beagle, Galvin brings to life the story of Darwin’s cabin boy and assistant. Simon is brave and selfless even when it’s difficult to be either, and you’ll cheer for him at every turn.”
— Marielle Orff, Towne Book Center and Wine Bar, Collegeville, PA

How to Train Your Dragon meets natural history, with real science, in this story of discovery through one of the lens of one of the most historical voyages in history.It's 1835. Cabin boy Simon Covington is on the voyage of a lifetime to the Galapagos Islands with the world-famous scientist, Charles Darwin.But when Simon falls overboard during a huge storm, he washes up on an unexplored island. Stranded there, he makes a discovery that could change the world. Now it's not just his own survival at stake - the future of an undiscovered species is in his hands. But perhaps there's one person who could help...Based on the real events of Charles Darwin's legendary voyage, this is a novel that melds science with wonder.
Lindsay was lucky enough to be raised in a house of stories, music, and love of the sea. She left part of her heart underwater after living and working in Thailand where she spent hundreds of blissful hours scuba diving. Forced now to surface for breath, she lives in sight of the chillier Sussex sea with her husband and two sons. When she is not writing, she can be found reading, running or practicing yoga. She has a degree in English language and literature, is fascinated by psychology and the natural world, and teaches science. Lindsay hadn’t written creatively since childhood until the idea for her debut novel The Secret Deep splashed into her mind, and now she’s hooked.