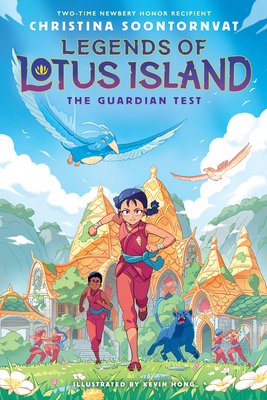 Young Plum is shocked to discover that she’s been accepted to the Guardian Academy on Lotus Island, an elite school where kids learn how to transform into Guardians, magical creatures who are sworn to protect the natural world. The Guardian masters teach Plum and her friends how to communicate with animals and how to use meditation to strengthen their minds and bodies. All the kids also learn to fight, so they can protect the defenseless if needed.

To her dismay, Plum struggles at school. While her classmates begin to transform into amazing creatures, Plum can’t even seem to magic up a single feather! If she can’t embrace her inner animal form soon, she’ll have to leave school ― and lose the first group of real friends she’s ever known.

Christina Soontornvat is the author of the Newbery Honor books A Wish in the Dark and All Thirteen, which also won the Kirkus Prize and a Sibert Honor distinction. She is also the author of Scholastic’s beloved fantasy series Diary of an Ice Princess and several picture books including To Change a Planet illustrated by Rahele Jomepour Bell, which received a starred review in Kirkus. Christina holds a B.S. in Mechanical Engineering and a master’s degree in Science Education. She spent a decade working in the science museum field, where she designed programs and exhibits to get kids excited about science and STEM. Christina lives in Austin, Texas, with her husband, two young children, and one old cat. You can learn more about her work at soontornvat.com.