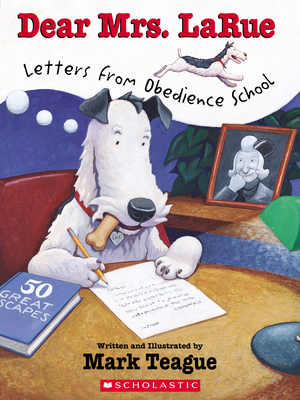 
Recently On Our Shelves
A dog laments his fate at obedience school through a series of hilarious letters home.

When Ike LaRue is "imprisoned" at the Igor Brotweiler Canine Academy, he tries everything to get sent home -- from weepy letters to his owner to illness. In reality, Brotweiler is more like camp than prison, but still, Ike's not cut out for life without Mrs. LaRue. Finally, he runs away only to find himself back in Snort City -- just in time to save Mrs. LaRue's life.

This classic picture book by How Do Dinosaurs...? illustrator Mark Teague is now available as a trade paperback!

Mark Teague is the internationally bestselling illustrator (and author) of more than 50 books for children. His numerous awards and honors include the Book Sense Book of the Year Award and the Christopher Medal. He has illustrated 12 full-size books and 11 board books in the widely successful How Do Dinosaurs...? series. He is the author of the popular Dear Mrs. LaRue, Firehouse!, and Jack and the Beanstalk and the French Fries. He lives in New York State.

* "A tail-wagger of a book that will have readers howling with amusement." -- Publishers Weekly, starred review

"The humorous acrylic illustrations are, at times, a howl... charming Ike will likely find a home in many picture-book collections." -- School Library Journal

Daughters of a Dead Empire (Hardcover)

A stunning debut from O'Neil, this revisionist telling of the Russian legend of Anastasia rings true even with today's current events. Pulsing with energy, this Anna seems at first ill prepared for life's hardships but stumbling upon peasant Zhenya, the two form a fragile bond that deepens as violence and bloodshed encircle them. Readers will be salivating for O'Neil's next effort! Highly recommended.