The book you are viewing is from our St. Francis Summer Reading for Juniors list, we believe you may also like the following ...

Lincoln's Sword: The Presidency and the Power of Words (Paperback) 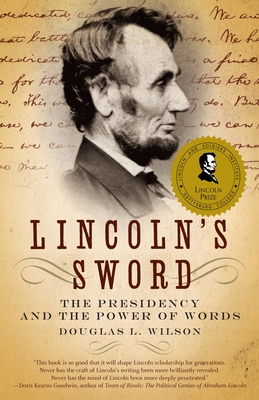 Widely considered in his own time as a genial but provincial lightweight who was out of place in the presidency, Abraham Lincoln astonished his allies and confounded his adversaries by producing a series of speeches and public letters so provocative that they helped revolutionize public opinion on such critical issues as civil liberties, the use of black soldiers, and the emancipation of slaves. This is a brilliant and unprecedented examination of how Lincoln used the power of words to not only build his political career but to keep the country united during the Civil War.

“This book is so good that it will shape Lincoln scholarship for generations. Never has the craft of Lincoln’s writing been more brilliantly revealed. Never has the mind of Lincoln been more deeply penetrated.”
—Doris Kearns Goodwin, author of Team of Rivals: The Political Genius of Abraham Lincoln

“Fascinating. . . an engaging story of how Lincoln used his great intellect and love of the English language to pull the country through its darkest hour. Most books about Lincoln tell the reader why he was a great man; Lincoln's Sword tells how he made himself a great man.”
—Pittsburg Tribune-Review

“The finest book yet produced about Lincoln's uncanny creative process. . . makes a major contribution to scholarship.”
—The New York Sun

“What a delight, what a wonder. . . . For a few hours your faith will be restored in democracy and politics.”
—San Francisco Chronicle