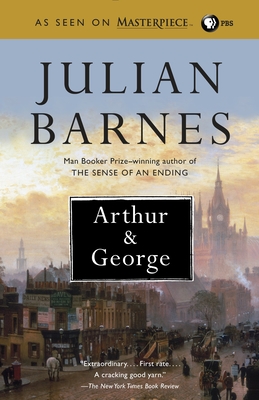 
Available to Order from Our Warehouse
NATIONAL BESTSELLER • BOOKER PRIZE FINALIST • From the bestselling author of The Sense of an Ending comes an “extraordinary … first rate” novel (The New York Times Book Review) that follows the lives of two very different British men and explores the grand tapestry of late-Victorian Britain.

As boys, George, the son of a Midlands vicar, and Arthur, living in shabby genteel Edinburgh, find themselves in a vast and complex world at the heart of the British Empire. Years later—one struggling with his identity in a world hostile to his ancestry, the other creating the world’s most famous detective while in love with a woman who is not his wife—their fates become inextricably connected.
Julian Barnes is the author of two books of stories, two collections of essays, a translation of Alphonse Daudet's In the Land of Pain, and nine previous novels. In France he is the only writer to have won both the Prix Médicis and the Prix Fémina, and in 2004 he became a Commandeur de l'Ordre des Arts et des Lettres. In England his honors include the Somerset Maugham Award and the Geoffrey Faber Memorial Prize. He has also received the E. M. Forster Award from the American Academy and Institute of Arts and Letters. He lives in London.

“An absorbing fictional re-creation of a real-life detective story.... A finely evocative historical novel as well as a morally and psychologically astute glimpse into the worlds of two men.”
—Los Angeles Times Book Review

“Masterly throughout.... The author keeps the reader on edge.”
—The Washington Post Book World

“Deeply satisfying.... From the first chapter, Barnes has us in his thrall.” –San Francisco Chronicle

“A page-turner.... Arthur & George is by far Mr. Barnes's most pressurized novel to date.” —The Wall Street Journal

“A marvelous book.” —Entertainment Weekly, “A”

“His most engrossing novel ever.” —Jay McInerney, The New York Observer