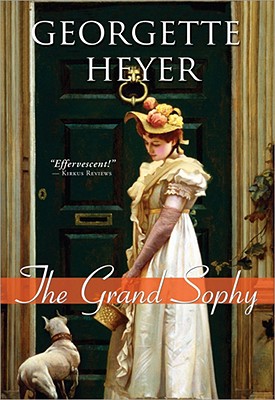 This is book number 10 in the Regency Romances series.

A reader favorite from the Queen of Regency Romance, The Grand Sophy is an utterly hilarious and completely endearing story of a charming young heroine and the outrageous lengths she goes to solve everyone else's problems, and the surprises in store for everyone

When Sir Horace Stanton-Lacy is ordered to South America on diplomatic business, he parks his only daughter, Sophy, with his sister in Berkeley Square. Forward, bold, and out-spoken, Sophy sweeps in and immediately takes the ton by storm.

Upon her arrival, Sophy can see that her cousins are in a sad tangle: Ceclia is in love with a poet, Charles is engaged to a dour bluestocking, her uncle is of no use at all, and the younger children are in desperate need of some fun and freedom. They all need her help and it's providential that Sophy arrives when she does.

What reviewers are saying about The Grand Sophy:
The Grand Sophy was an exciting, charming read. The characters grab you and don't let go. --Anna's Book Blog
Fun, engaging and hilarious, I cannot recommend it more highly. Sophy is a devilishly fine girl. -- AustenProse
The Grand Sophy is a very entertaining Regency romance with wonderfully eccentric characters and a very humorous plot.--Once Upon a Romance
Georgette Heyer is the Queen of the Regency Romance. Long may she reign --New York Times bestselling author LAUREN WILLIG

The late Georgette Heyer was a very private woman. Her historical novels have charmed and delighted millions of readers for decades, though she rarely reached out to the public to discuss her works or private life. It is known that she was born in Wimbledon in August 1902, and her first novel, The Black Moth, was published in 1921. Heyer published 56 books over the next 53 years, until her death from lung cancer in 1974. Heyer's large volume of works included Regency romances, mysteries and historical fiction. Known also as the Queen of Regency romance, Heyer was legendary for her research, historical accuracy and her extraordinary plots and characterizations. Her last book, My Lord John, was published posthumously in 1975. She was married to George Ronald Rougier, a mining engineer, and they had one son together, Richard.