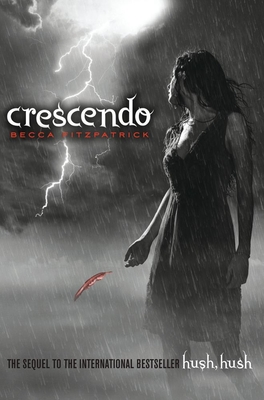 “At the end of Hush, Hush, Nora escaped death at the hands of Chauncey, a Nephilim, and Patch had been made Nora's guardian angel. However, rules forbid angels from having any kind of romantic relationship with humans, and unless he wants to be sent to hell for good, Patch must end everything with Nora. Nora understands, but when she starts getting anonymous tips about her dad's killer, all the clues seem to point to Patch. Crescendo is a sequel that doesn't disappoint, and readers will be eager for the next book in this series.”
— Emily Grossenbacher, Lemuria Bookstore, Jackson, MS

The second book in the breathtaking New York Times bestselling Hush, Hush saga, soon to be a major motion picture!

Nora should have known her life wouldn’t stay perfect for long. Despite starting a relationship with her bad boy guardian angel, Patch, and surviving an attempt on her life, things are not looking up. Patch is starting to pull away and Nora can’t figure out if it’s for her best interest or if his interest has shifted to her arch-enemy Marcie Millar. Not to mention that Nora is haunted by images of her father and starting to become obsessed with finding out what really happened to him that night he left for Portland and never came home.

The farther Nora delves into the mystery of her father’s death, the more she comes to question if her Nephilim blood line has something to do with it as well as why she seems to be in danger more than the average girl when she has a guardian angel. Since Patch isn’t answering her questions, she has to start finding the answers on her own. But when she finds them, will she be able to count on Patch or are the things he’s hiding from her darker than she can imagine?
Becca Fitzpatrick is the author of Black Ice, Dangerous Lies, and the Hush, Hush saga, including Hush, Hush; Crescendo; Silence; and Finale—all four of which debuted as New York Times bestsellers. She graduated college with a degree in health, which she promptly abandoned for storytelling. When not writing, she’s most likely running, prowling sales racks for shoes, or watching crime dramas on TV. She lives in Colorado with her family. Find out more at BeccaFitzpatrick.com.