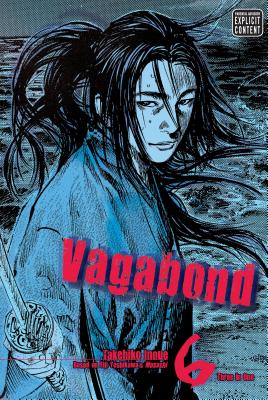 This is book number 6 in the Vagabond VIZBIG Edition series.

Sasaki Kojirō is the man destined to become Miyamoto Musashi's greatest rival and opponent in the most well-known duel in the annals of Japanese history. As a deaf-mute young man coming of age in a remote seaside village, Kojirō's innate ability with the sword compels him to become even better. This drive takes him beyond the borders of his peaceful village into the violent and chaotic world of feudal era Japan in the midst of a bloody war.
Takehiko Inoue is the creator of one of the most popular manga of all time, Slam Dunk, which has sold over 100 million copies worldwide. He followed that series up with two titles lauded by critics and fans alike—Vagabond, a fictional account of the life of Miyamoto Musashi, and Real, a manga about wheelchair basketball. Inoue is the recipient of numerous awards, including the prestigious Tezuka Osamu Culture Award and the Media Arts Festival Award. In addition to his work on manga, Inoue has worked on television commercials, character designs for video games, and is the founder of a scholarship to foster Japanese basketball talent.