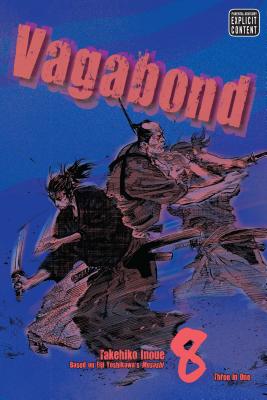 This is book number 8 in the Vagabond VIZBIG Edition series.

Musashi has returned to Kyoto one year after he last attempted to take on the mighty Yoshioka School, and the entire city is abuzz anticipating the rematch to come. When the elder disciples of the Yoshioka discover the unbelievable progress Musashi has made along the way of the sword, they plot to defeat him however they can--even if it means resorting to dishonorable means.
Takehiko Inoue is the creator of one of the most popular manga of all time, Slam Dunk, which has sold over 100 million copies worldwide. He followed that series up with two titles lauded by critics and fans alike—Vagabond, a fictional account of the life of Miyamoto Musashi, and Real, a manga about wheelchair basketball. Inoue is the recipient of numerous awards, including the prestigious Tezuka Osamu Culture Award and the Media Arts Festival Award. In addition to his work on manga, Inoue has worked on television commercials, character designs for video games, and is the founder of a scholarship to foster Japanese basketball talent.

Sepetys' handle on the hidden history of the youth uprising in communist Romania is masterful and without peer. Get ready to have your breath taken away with this thriller!