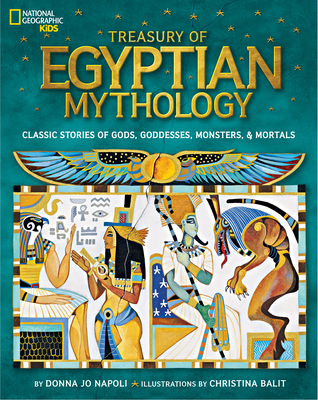 
Available to Order from Our Warehouse
The new National Geographic Treasury of Egyptian Mythology is a stunning tableau of Egyptian myths, including those of pharaohs, queens, the boisterous Sun God Ra, and legendary creatures like the Sphinx. The lyrical storytelling of award-winning author Donna Jo Napoli dramatizes the timeless tales of ancient Egypt in the year when Angelina Jolie will make Cleopatra a multimedia star. And just like the popular National Geographic Treasury of Greek Mythology, the stories in this book will be beautifully illustrated to bring ancient characters vividly to life.

The stories are embellished with sidebars that provide historical, cultural, and geographic context and a mapping feature that adds to the fun and fascination. Resource notes and ample back matter direct readers to discover more about ancient Egypt. With its attractive design and beautiful narrative, this accessible treasury stands out from all other mythology titles in the marketplace.
DONNA JO NAPOLI is professor of linguistics at Swarthmore College, mother of five, grandmother of five, and the author of more than 80 books for children and young adults. While her undergraduate major was mathematics and her graduate work was in linguistics, she has a profound love of mythology, folklore, and fairy tales.


CHRISTINA BALIT is a graduate of the Chelsea School of Art and the Royal College of Art, London. An award-winning dramatist and illustrator, Christina has painted more than 20 children's books, including Blodin and the Beast by Michael Morpurgo, Zoo in the Sky, The Planet Gods, The Lion Bible, National Geographic's Treasury of Greek Mythology, and National Geographic's Treasury Egyptian Mythology. Her author titles include Escape From Pompeii, Atlantis, The Legend of the Lost City, and An Arabian Home. Her plays include Woman With Upturned Skirt, The Sentence, and Needle (winner of the Brave New Role award).

"Sumptuous of format, magisterial of content, stimulating for heart and mind both." --Kirkus Reviews, starred review

"In this exemplary book of folklore, Napoli introduces young readers to Egyptian mythology with vivid language and illustration and anchors the tales in intriging and research-supported interpretation." --Association for Library Service to Children

The Ogress and the Orphans (Hardcover)

What is goodness? Is goodness only for the good and wickedness for the wicked? If the good perform wicked acts, are they still good? What is a neighbor? Is a neighbor only those which dwell next door, across town, or just outside your front door? What is goodness, when not shared with a neighbor that needs it?