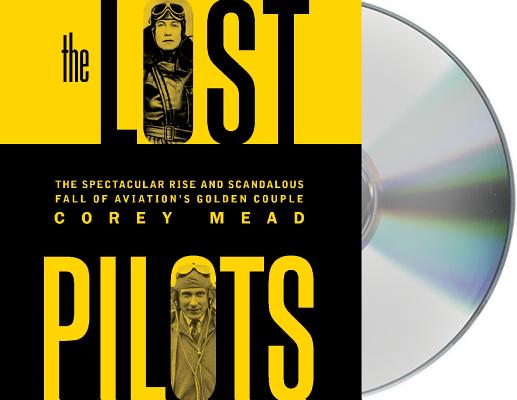 Corey Mead's The Lost Pilots is the saga of two star crossed pilots who soar to the greatest heights of fame, tailspin into scandal and crime, and go the ultimate lengths for a chance at redemption.

During the height of the roaring twenties, Jessie Miller longs for adventure. Fleeing a passionless marriage in the backwaters of Australia, twenty-three-year-old Jessie arrives in London and promptly falls in with the Bright Young Things, those gin-soaked boho-chic intellectuals draped in suits, flapper dresses, and pearls. At a party Jessie meets Captain William Lancaster, married himself and fresh from the Royal Air Force, with a scheme in his head to become as famous as Charles Lindbergh, who has just crossed the Atlantic. Lancaster will do Lindy one better: fly from London to Melbourne, and in Jessie Miller he’s found the perfect co-pilot.

Within months the two embark on a half-year journey across the globe, hopping from one colonial outpost to the next. But like world records, marriage vows can be broken, and upon their landing in Melbourne Jessie and William are not only international celebrities, but also deeply in love.

Yet the crash of 1929 catches up to even the fastest aviator, and the couple finds themselves in dire straits at their rented house on the outskirts of Miami – the bright glare of the limelight fading quickly.To make ends meet Jessie agrees to write a memoir, and picks the dashing Haden Clarke to be her ghostwriter. It’s not long before this toxic mix of bootleg booze and a handsome interloper leads to a shocking crime, a trial that rivets and scandalizes the world, and a reckless act of abandon to win back former glory.

The Lost Pilots is an extraordinary true story, brought to vivid life by Corey Mead. Based on years of research, and full of adventure, forbidden passion, crime, scandal and tragedy, it is a masterwork of narrative nonfiction that firmly restores one of aviation’s leading female pioneers to her rightful place in history.

Praise for The Lost Pilots:

"The tale of two intrepid aviators who got caught in a sordid scandal… How the pair ended up in a Miami courtroom is the subject of Mead's colorful, fast-paced narrative, a tale of ambition, betrayal, lust, and devotion...A brisk, entertaining history of daring and passion." — Kirkus

Corey Mead is an Associate Professor of English at Baruch College, City University of New York. He is the author of Angelic Music: The Story of Benjamin Franklin’s Glass Armonica and War Play: Video Games and the Future of Armed Conflict. His work has appeared in Time, Salon, The Daily Beast, and numerous literary journals.

His film credits include Fly Away Home, Maximum Overdrive, Hairspray, and The Diversion, a short film which he acted in and produced. On television, he has appeared in Army Wives, Damages, As The World Turns, Rescue Me, Law & Order and New York Undercover. He received a B.A. from Skidmore College and an M.F.A. from Vermont College.