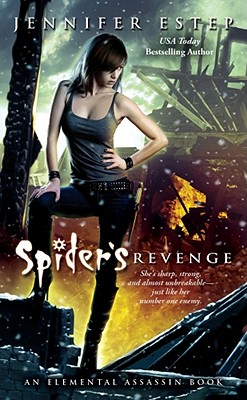 This is book number 5 in the Elemental Assassin series.

And I plan on murdering someone before the night is through.

Killing used to be my regular gig, after all. Gin Blanco, aka the Spider, assassin-for-hire. And I was very, very good at it. Now, I’m ready to make the one hit that truly matters: Mab Monroe, the dangerous Fire elemental who murdered my family when I was thirteen. Oh, I don’t think the mission will be easy, but turns out it’s a bit more problematic than expected. The bitch knows I’m coming for her. So now I’m up against the army of lethal bounty hunters Mab hired to track me down. She also put a price on my baby sister’s head. Keeping Bria safe is my first priority. Taking Mab out is a close second. Good thing I’ve got my powerful Ice and Stone magic—and my irresistible lover, Owen Grayson—to watch my back. This battle has been years in the making, and there’s a good chance I won’t survive. But if I’m going down, then Mab’s coming with me . . . no matter what I have to do to make that happen.
Jennifer Estep is a New York Times and USA Today bestselling author prowling the streets of her imagination in search of her next fantasy idea. Spider’s Bite, Web of Lies, Venom, Tangled Threads, Spider’s Revenge, By a Thread, Widow’s Web, Deadly Sting, Heart of Venom, The Spider, Poison Promise, Black Widow, Spider’s Trap, Bitter Bite, Unraveled, and Snared, along with the e-shorts Thread of Death, Parlor Tricks, Kiss of Venom, Unwanted, and Nice Guys Bite are the other works in her red-hot Elemental Assassin urban fantasy series. Jennifer is also the author of the Black Blade and Mythos Academy young adult urban fantasy series and the Bigtime paranormal romance series. For more on Jennifer and her books, visit her at JenniferEstep.com and @Jennifer_Estep.

“This series kicked off with a bang, and the action hasn’t let up since.” —Fresh Fiction

“Estep is rapidly heading toward the top of the urban fantasy genre!” —Romantic Times

“Gin Blanco is one of the most intriguing heroines on the scene. . . . If you have not gotten on the bandwagon yet, do so today!” —RT Book Reviews