Thirst No. 3: The Eternal Dawn (Paperback) 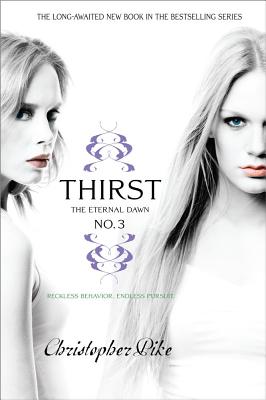 Thirst No. 3: The Eternal Dawn (Paperback)

This is book number 3 in the Thirst series.

Alisa has spent the past five thousand years as a vampire, living alone and fighting for survival. In her loneliness, Alisa cannot resist bringing Teri—a descendant of her human family—into her life. But Alisa is surrounded by death and destruction, and just by knowing Alisa, Teri’s life is at risk.

Alisa’s guilt grows when she becomes involved in a dangerous conspiracy. A top-secret group knows Alisa’s secret and will stop at nothing to use her powers for their cause. As Alisa desperately tries to protect herself and Teri from the unknown enemy, she discovers a force more powerful and more lethal than anything she has ever seen. Alisa doesn’t know who to trust, who to challenge, or who she will become….
Christopher Pike is a bestselling author of young adult novels. The Thirst series, The Secret of Ka, and the Remember Me and Alosha trilogies are some of his favorite titles. He is also the author of several adult novels, including Sati and The Season of Passage. Pike currently lives in Santa Barbara, where it is rumored he never leaves his house. But he can be found online at Facebook.com/ChristopherPikeBooks.