Where Things Come Back (Paperback) 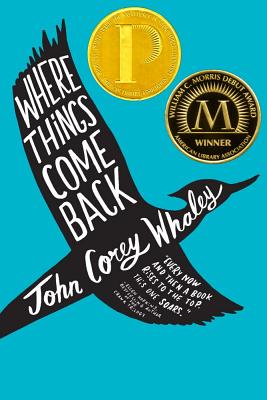 Winner of the 2012 Michael L. Printz and William C. Morris Awards, this poignant and hilarious story of loss and redemption “explores the process of grief, second chances, and even the meaning of life” (Kirkus Reviews).

In the remarkable, bizarre, and heart-wrenching summer before Cullen Witter’s senior year of high school, he is forced to examine everything he thinks he understands about his small and painfully dull Arkansas town. His cousin overdoses; his town becomes absurdly obsessed with the alleged reappearance of an extinct woodpecker; and most troubling of all, his sensitive, gifted fifteen-year-old brother, Gabriel, suddenly and inexplicably disappears.
Meanwhile, the crisis of faith spawned by a young missionary’s disillusion in Africa prompts a frantic search for meaning that has far-reaching consequences. As distant as the two stories initially seem, they are woven together through masterful plotting and merge in a surprising and harrowing climax.
This extraordinary tale from a rare literary voice finds wonder in the ordinary and illuminates the hope of second chances.

John Corey Whaley grew up in Louisiana. His debut novel, Where Things Come Back, was the 2012 winner of the Michael L. Printz and the William C. Morris Awards. You can learn more about him at JohnCoreyWhaley.com and follow him on Twitter: @Corey_Whaley.

"Every now and then a book rises to the top. Where Things Come Back soars. Keep your eye on author Corey Whaley. That is, if you can see the stratosphere."
— Ellen Hopkins, New York Times bestselling author of the Crank Trilogy

“In this darkly humorous debut, Whaley weaves two stories into a taut and well-constructed thriller…Vulnerability balances Cullen's arch sarcasm, and the maelstrom of media attention lavished on the woodpecker offers an element of the absurd, especially when juxtaposed against the mystery of Gabriel's disappearance. The portentous tone and flat affect of Whaley's writing is well-suited to the story's religious themes and symbolism… as Whaley gradually brings the story's many threads together in a disturbing, heartbreaking finale that retains a touch of hope.”
— Publishers Weekly, April 11, 2011, *STAR

“In a build-up that explores the process of grief, second chances and even the meaning of life, Cullen’s and Cabot’s worlds slowly intersect and solve the mystery of Gabriel’s disappearance in this multilayered debut for sophisticated readers. Unexpected, thought-provoking storytelling.”
— Kirkus, April 15, 2011

“The characters’ reactions are palpable as their grief deepens and yet they continue to hope for Gabriel’s return. Cullen is an eloquent, thoughtful narrator…the ending is worth the wait.”
— School Library Journal, July 2011

"The author has managed to capture his characters’ feelings of loss and despair with both compassion and empathy. The plot is extremely well thought out and encompasses the tangle of teenage relationships, friendships, and life experiences using humor and thoughtful language...authentic, small-town teenagers; and the main protagonist, Cullen, is well-developed and convincing. An unexpected ending brings about a moving close to the novel."
— VOYA, June 2011

“What will hold readers most is the moving story of Cullen’s beloved younger brother, who suddenly goes missing, leading to mystery, heartbreak, and an astonishing resolution on the very last page…An intriguing, memorable offering teens will want to discuss.”
— Booklist, May 2011

“[A] smart, darkly funny, and multilayered debut…. Whaley weaves numerous story lines and themes together with the confidence of a seasoned writer, resulting in a thought-provoking story about media, faith, and family.”
— Publishers Weekly, November 7, 2011, a "Best Books of 2011" selection