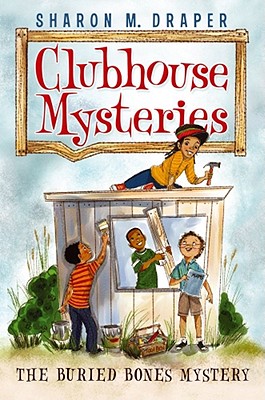 This is book number 1 in the Clubhouse Mysteries series.

Four boys who call themselves the Black Dinosaurs dig up a mysterious box of bones in this first book of the classic chapter book series by award-winning author Sharon M. Draper.

Ziggy and his friends Rico, Rashawn, and Jerome build a clubhouse in Ziggy’s backyard and decide to bury their secret treasures nearby. But when the boys start digging, they uncover a box of bones and are swept up in a mystery more intriguing—and scary—than anything they could have imagined. Who could have buried a box of bones behind their clubhouse?