Heidi Heckelbeck Has a Secret (Paperback) 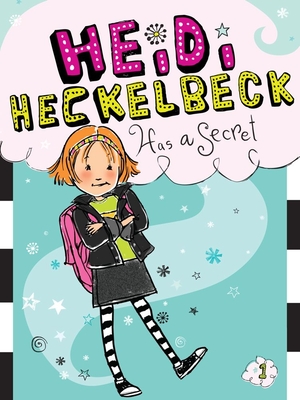 Heidi Heckelbeck Has a Secret (Paperback)

This is book number 1 in the Heidi Heckelbeck series.

Now readers between the ages of five and seven can read chapter books tailor-made for a younger level of reading comprehension. Heavily illustrated with large type, Little Simon's young chapter books let young readers feel like they are reading a “grown-up” format with subject, text, and illustrations geared specifically for their own age groups!

Heidi Heckelbeck seems like any other eight-year-old, but she has a secret: She’s a witch in disguise. Careful to keep her powers hidden (but excited to use them all the same), Heidi’s learning to live like any other kid—who just happens to be witch. And with easy-to-read language and illustrations on almost every page, Heidi Heckelbeck chapter books are perfect for beginning readers.

Heidi and her brother Henry have always been homeschooled—until now. But Heidi is not happy about attending Brewster Elementary, especially not when meanie Melanie Maplethorpe turns Heidi’s first day of school into a nightmare by announcing that Heidi is smelly and ruining her art project. Heidi feels horrible and never wants to go back to school—but while sulking in her room at home, she remembers her special medallion and Book of Spells. With a little bit of carefully concealed magic, Heidi might be able to give Melanie a taste of her own medicine….
Wanda Coven has always loved magic. When she was little, she used to make secret potions from smooshed shells and acorns. Then she would pretend to transport herself and her friends to enchanted places. Now she visits other worlds through writing. Wanda lives with her husband and son in San Jose, California. They have three cats: Hilda, Agnes, and Claw-dia.

Heidi has always been taught at home, and she is nervous and grumpy about starting second grade at
Brewster Elementary. And it’s a not-so-promising beginning when mean-queen Melanie puts Heidi on her
radar, taunting her, vandalizing her art project for Mr. Doodlebee, and suggesting she play a tree in the
class production of The Wizard of Oz (while Melanie is Dorothy, of course)—and all on the first day!
Even though Heidi meets a nice girl named Lucy, she feels she doesn’t fit in at school and wishes she
never had to return. But sudden inspiration leads her to conjure up a plan for payback and her secret is
revealed in the teaser ending. Geared towards new readers, this series opener features simple vocabulary,
large and well-spaced text, short chapters, and interspersed black-and-white cartoon-style drawings while
sympathetically depicting Heidi’s challenges, from dealing with bullies to finding friends. Assorted
characters—including Heidi’s supportive mom, soda pop–formula inventor dad, and peppy younger
brother—add lively touches, and the ending hints of more mischief to come.

COVEN, Wanda. Heidi Heckelbeck Has a Secret. Bk. 1. illus. by Priscilla Burris. 118p. (Heidi Heckelbeck Series). CIP. S & S/Little Simon. 2012. Tr $14.99. ISBN 978-1-4424-4087-6; pap. $4.99. ISBN 978-1-4424-3565-0; ebook $5.99. ISBN 978-1-4424-3566-7. LC 2011014304.
Gr 1-3–After being homeschooled, Heidi Heckelbeck is not happy about starting second grade at Brewster Elementary. Her bad attitude shines through hilariously in dialogue and details, such as a math problem she makes up: “Heidi + School = Yuck.” Quickly, mean Melanie and nice new friend Lucy emerge as Heidi makes her way through class, lunch in the cafeteria, and rehearsal for the school play. Much of the plot centers on Melanie’s nasty antics. Don’t worry; Heidi gets even, thanks to the fact that she is a witch and she consults her Book of Spells in the cliff-hanger ending. It’s this secret about her identity, and Heidi’s relatable personality, that will keep readers coming back for more. Large font, an engaging story, and frequent illustrations make this a good choice for new chapter-book readers.
SLJ, June 2012