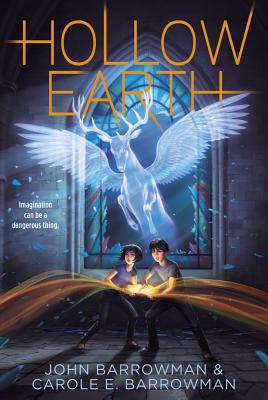 
NOT AVAILABLE
In this fresh and innovative middle grade fantasy, imagination matters most in a world where art can keep monsters trapped—or set them free.

Lots of twins have a special connection, but twelve-year-old Matt and Emily Calder can do way more than finish each other’s sentences. Together, they are able to bring art to life and enter paintings at will. Their extraordinary abilities are highly sought after, particularly by a secret group who want to access the terrors called Hollow Earth. All the demons, devils, and evil creatures ever imagined are trapped for eternity in the world of Hollow Earth—trapped unless special powers release them.

The twins flee from London to a remote island off the west coast of Scotland in hopes of escaping their pursuers and gaining the protection of their grandfather, who has powers of his own. But the villains will stop at nothing to find Hollow Earth and harness the powers within. With so much at stake, nowhere is safe—and survival might be a fantasy.
John Barrowman has appeared onstage, including on London’s West End, and on-screen. He is perhaps best known for his portrayal of Captain Jack Harkness in Doctor Who and Torchwood, as well as appearances on Desperate Housewives, and Scandal. He is currently a series regular on Arrow.

Carole E. Barrowman is a journalist and a professor of English in Wisconsin.

The Priory of the Orange Tree (The Roots of Chaos) (Paperback)