Sally Ride: Life on a Mission (A Real-Life Story) (Paperback) 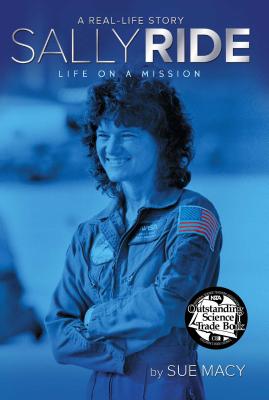 Sally Ride: Life on a Mission (A Real-Life Story) (Paperback)

By Sue Macy
List Price: $7.99
Our Price: $6.99
(Save: $1.00 13%)
Recently On Our Shelves
Sally Ride was more than the first woman in space—she was a real-life explorer and adventurer whose life story is a true inspiration for all those who dream big.

Most people know Sally Ride as the first American female astronaut to travel in space. But in her lifetime she was also a nationally ranked tennis player, a physicist who enjoyed reading Shakespeare, a university professor, and the founder of a company that helped inspire girls and young women to pursue careers in science and math. Posthumously, she was a recipient of the Presidential Medal of Freedom.

From Sally Ride’s youth to her many groundbreaking achievements in space and beyond, Sue Macy’s riveting biography tells the story of not only a pioneering astronaut, but a leader and explorer whose life, as President Barack Obama said, “demonstrates that the sky is no limit for those who dream of reaching for the stars.”
Sue Macy is the acclaimed author of many books for young readers, including Miss Mary Reporting: The True Story of Sportswriter Mary Garber, which was on the Amelia Bloomer List and named a CBC/NCSS Notable Social Studies Trade Book, among many other accolades. Sue is also the author of Wheels of Change: How Women Rode the Bicycle to Freedom and Basketball Belles: How Two Teams and One Scrappy Player Put Women’s Hoops on the Map. A former editor at Scholastic, she lives in Englewood, New Jersey. Learn more at SueMacy.com.
Macy’s comprehensive, admiring biography offers detail and perspective about Ride’s groundbreaking career and contributions.
— School Library Journal

A fast-moving, straightforward and up-to-date biography of the first American woman astronaut.
— Kirkus