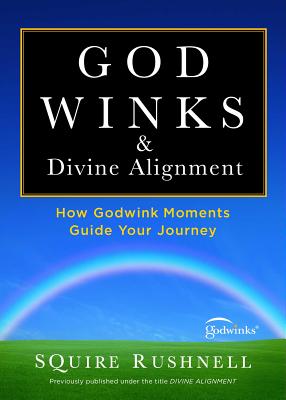 This is book number 4 in the The Godwink Series series.

The mega-bestselling author of the Godwinks series reveals seven steps to growing more closely aligned with God using your internal GPS and becoming more effective, successful, and fulfilled in everything you do.

It’s happened to you.

You received a phone call out of the blue, or you bumped into someone who led you to a new job, a new relationship, or opportunity that totally changed your life. You probably even said, “Wow, what a coincidence I met so-and-so.” But . . . did you ever stop to ask what caused that person to be right there, at that exact moment, in your path? It was Divine Alignment: the arrangement of coincidences into a pattern of alignment so astonishing they could have come only from a higher source.

In this inspiring work, SQuire Rushnell shows readers how they can navigate life’s thorniest hurdles, rediscover the deep meaning and impact of personal prayer, and develop the individual conviction and wherewithal it takes to reach their full potential and fulfill their most ambitious dreams by honoring the book’s seven easy-to-follow steps.

In his charmingly avuncular and wonderfully optimistic voice, SQuire shares moving stories from his own and others’ lives to show the awesome strength inherent in what he calls God’s Positioning System, or GPS. All of us, he assures readers, can use our own personal GPS to grow more closely aligned with God and become vastly more effective, successful, and fulfilled in our relationships, careers, and everything we do.
SQuire Rushnell is a popular speaker and New York Times bestselling author who has coined the term “Godwink,” now in mainstream usage. Within more than one million books in print, SQuire’s Godwink stories are a popular monthly feature on the NBC Today Show. He has also appeared on several national television programs including Fox News Channel’s Fox & Friends and CBS Sunday Morning. As a veteran ABC Television Network executive, he led Good Morning America to the number one spot and oversaw the acclaimed Schoolhouse Rock! series and the ABC Afterschool Specials. Programs under his direction have captured more than seventy-five Emmy Awards.