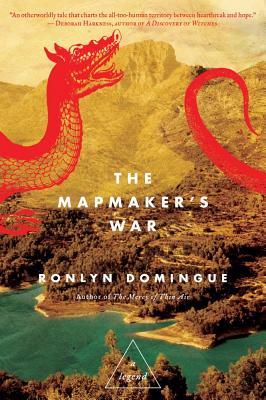 By Ronlyn Domingue
$23.00
Hard to Find - Not Available

This is book number 1 in the The Keeper of Tales Trilogy series.

From the critically acclaimed author of The Mercy of Thin Air comes a fantastic tale, inspired by myth and legend, of an exiled mapmaker who must come to terms with the home and children she left behind.

This will be the map of your heart, old woman. In an ancient time, in a faraway land, a young woman named Aoife is allowed a rare apprenticeship to become her kingdom’s mapmaker, tasked with charting the entire domain. Traveling beyond its borders, she finds a secretive people who live in peace, among great wealth. They claim to protect a mythic treasure, one connected to the creation of the world. When Aoife reports their existence to her kingdom, the community is targeted as a threat. Attempting to warn them of imminent danger, Aoife is exiled for treason and finds refuge among the very people who had been declared her enemy. With them, she begins a new life surrounded by kindness, equality, and cooperation. But within herself, Aoife has no peace. She cannot share the grief she feels for the home and children she left behind. She cannot bear the warrior scars of the man she comes to love. And when she gives birth to their gifted daughter, Aoife cannot avoid what the child forces her to confront about her past and its truth. On this most important of journeys, there is no map to guide her. In this tale—her autobiography— Aoife reveals her pain and joy, and ultimately her transformation.

The Mapmaker’s War is a mesmerizing, utterly original adventure about love and loss and the redemptive power of the human spirit. Watch for its epic sequel, The Chronicle of Secret Riven, in 2014.

“Journey to the heart of a fairy-tale land with doomed queens, epic quests, and enemy kingdoms in The Mapmaker’s War. Ronlyn Domingue’s jewel of a book has a big canvas, memorable characters, and intimate storytelling. You will be swept away by this otherworldly tale that charts the all-too-human territory between heartbreak and hope.”
— Deborah Harkness, New York Times bestselling author of A Discovery of Witches and Shadow of Night

“A map can make sense out of the seen world. But it can also evoke greed. And what of a map of the heart? Legend, allegory, fantasy—this second novel by Domingue entwines genres to cast a spell upon its reader.... A curious, thought-provoking story about how the heart’s terrain bears charting, too.”

“Beautifully capturing the tone and voice of a classically told tale, Ronlyn Domingue crafts a deeply intelligent, richly enhanced tale of magic, power, greed, and the infinite resilience of the human heart.”

“The book is reminiscent of some Edwardian novels in its emphasis on class and women’s issues. Its mysticism and naturalism also recall the classic Green Mansions, published during that period. If you give Domingue’s book a chance, it’ll entrance you.”

“Domingue follows up this success with The Mapmaker's War, another bold and innovative tale of a woman fighting for her place, told by second-person narrative.”

“A fun read for fantasy lovers.”

“Domingue deftly explores themes of motherhood, gender equality, and the powerful ties that bind us to our roots, while at the same time mesmerizing the reader with the story of a mythical land struggling to protect itself from the greed and jealousy of the slowly encroaching outside world.”