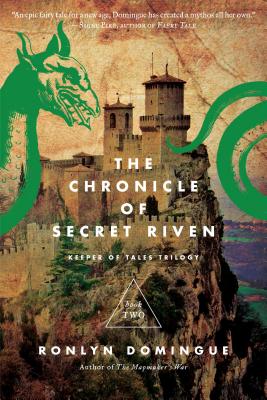 By Ronlyn Domingue
$24.00
Hard to Find - Not Available

This is book number 2 in the The Keeper of Tales Trilogy series.

An uncanny child born to brilliant parents, befriended by a prince, mentored by a wise woman, pursued by a powerful man, Secret Riven has no idea what destiny will demand of her or the courage she must have to confront it in the breathtakingly epic, genre-spanning sequel to The Mapmaker’s War.

One thousand years after a great conflict known as The Mapmaker’s War, a daughter is born to an ambitious historian and a gifted translator. Secret Riven doesn’t speak until her seventh year but can mysteriously communicate with plants and animals. Unsettled by visions and dreams since childhood, she tries to hide her strangeness, especially from her mercurial father and cold mother. When her knowledge of an esoteric symbol brings unwelcome attention, gentle, watchful Secret finds acceptance from Prince Nikolas, her best friend, and Old Woman, who lives in the distant woods.

When Secret is twelve, her mother, Zavet, receives an arcane manuscript to translate from an anonymous owner. Zavet begins to suffer nightmares and withdraws into herself. Secret sickens with a fever and awakens able to speak an ancient language, discovering that her mother is fluent as well. Suddenly, Zavet dies. The manuscript is missing, but a cipher has been left for Secret to find. Soon, Secret will have a choice to make: confront a destiny tied to an ancient past or deny it, never to know its whole truth.

A spellbinding story, rich with vivid characters and set in a fascinating world, The Chronicle of Secret Riven explores the tension between love and hate, trust and betrayal, fate and free will.

“A rare blend of historical mysticism and elaborately imagined fantasy…. This is a fantastically satisfying novel in which a character can plausibly converse with insects and foliage, while always maintaining a strict internal logic. I wish I could buy real estate in Domingue’s world.”
— Sean Beaudoin, author of The Infects and Wise Young Fool

“Mysterious manuscripts, arcane languages, and sinister silences animate the wonderfully inventive realm of Secret Riven, a character so powerful that we are both startled and enchanted as we tumble headlong into her world.”
— Maria Tatar, author of Enchanted Hunters: The Power of Stories in Childhood

“The Chronicle of Secret Riven is an extraordinary mix of a fresh voice and an Old World sensibility. With mesmerizing language, Ronlyn Domingue spins a tale of wonder, danger, and magic, taking the reader to a faraway world that helps us to see our own with more clarity. This is a book that reminds us of the power of silence, of paying attention, of intuition, and of protecting the most vulnerable among us.”
— Susan Henderson, author of Up From the Blue

“An epic fairy tale for a new age; Ronlyn Domingue has created a mythos all her own. The Chronicle of Secret Riven deftly braids the story of love, loss, magic, myth, and ancestry together into a hauntingly beautiful tale. The book also possesses a secret itself. If you know how to look for it, if you know how to listen, you’ll risk being inspired by the powerful message that glimmers beyond the pages of this shimmering story.”
— Signe Pike, author of Faery Tale

“A map can make sense out of the seen world. But it can also evoke greed. And what of a map of the heart? Legend, allegory, fantasy—this second novel by Domingue entwines genres to cast a spell upon its reader.... A curious, thought-provoking story about how the heart’s terrain bears charting, too.”

“Domingue deftly explores themes of motherhood, gender equality, and the powerful ties that bind us to our roots, while at the same time mesmerizing the reader with the story of a mythical land struggling to protect itself from the greed and jealousy of the slowly encroaching outside world.”

“A fun read for fantasy lovers.”