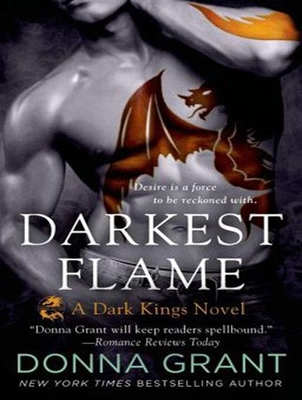 By Donna Grant, Antony Ferguson (Narrated by)
$39.99
Available to Order from Our Warehouse
This book cannot be returned

This is book number 1 in the Dark Kings Novels series.

Denae Lacroix is a beautiful MI5 agent on a deadly mission. Sent to the Scottish Highlands to spy on the mysterious Dreagan Industries, she discovers too late that she's been set up-as human bait. She is an irresistible lure for a man who has not seen or touched a woman for centuries. He is a man with a destiny-and a desire-that could destroy them both. It's been twelve hundred years since Kellan has walked among humans-and there's no denying the erotically charged attraction he feels for Denae. But as a Dragon King, he is sworn to protect his secrets. Yet the closer he gets to this smart, ravishing woman, the more her life is in danger. All it takes is one reckless kiss to unleash a flood of desire, the fury of dragons . . . and the fiercest enemy of all.

Donna Grant is the bestselling, award-winning author of more than twenty novels, including the Dark Sword series, the Druids Glen series, and the Sisters of Magic series, as well as several stand-alone titles, including "Forever Mine" and "Primal Heat."

Antony Ferguson, a native of London, England, is a classically trained actor and has appeared in numerous productions in London, Off Broadway, and Regional theater. As a voice actor, he has over fifty audiobooks to his credit.

Readers will become a #1 fan of Chunky! Hudi doesn't see anything wrong with himself, but his doctors and parents want him to participate in sports in order to loose weight. With humor and a cheering imaginary mascot, Hudi takes on the challenge from baseball to soccer, swimming and football. With post-game interviews and play-by-play action, this is fun look at real issues involving body image, peer pressure, and being a team player. For ages 10 +.