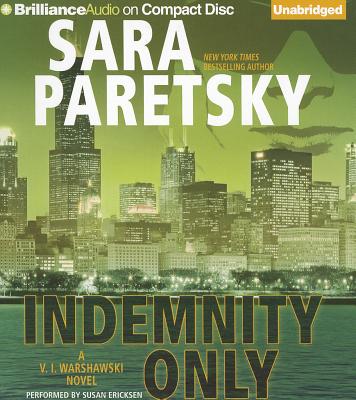 This is book number 1 in the V. I. Warshawski series.

In this gripping adventure -- the first V.I. Warshawski mystery -- America's top private eye is tossed into a dangerous adventure when a seemingly straightforward assignment becomes complicated and deadly. Hired by a man who calls himself John Thayer, V.I.'s assignment is to find Thayer's son Peter's missing girlfriend. But when V.I. Finds young Peter's dead body instead, her client disappears. Her efforts to track down her client and learn his true identity take her deep into a labyrinth of fraud and violence. By the time V.I. figures out the answers, she is in a race to find the missing young woman--before the murderers do. Praise for the audio edition of Body Work: "Susan Ericksen's portrayal of Chicago private investigator V.I. Warshawski is pitch-perfect." -- AudioFile, Earphones Award Winner Praise for the audio edition of Hardball: "...narrator Susan Ericksen ... ramps up the excitement in the story with a memorable voice that is intense and breathless. She's equally convincing as a gangbanger, a gentle nun, a kindly neighbor, and a stroke victim. Each character shines as an individual, making this one of the best Sara Paretsky productions ever." -- AudioFile, Earphones Award Winner.