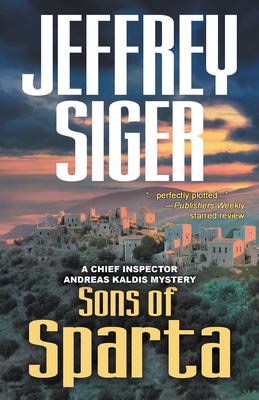 This is book number 6 in the Chief Inspector Andreas Kaldis Mysteries series.

Did the warriors of ancient Sparta simply vanish without a trace along with their city, or did they find sanctuary at the tip of the mountainous Peloponnese? That stark, unforgiving region's roots today run deep with a history of pirates, highwaymen, and neighbors ferociously repelling any foreigner foolishly bent on occupying this part of Greece. Less well-recorded are the Mani's families' strict code of honor and their history of endless vendettas with neighbors and with their own relatives. No wonder their farms look like fortresses.

When Special Crimes Division Detective Yiannis Kouros is summoned from Athens to the Mani by his uncle, Kouros fears his loyalty to his boss, Chief Inspector Andreas Kaldis, is about be to be tested by family pressure on the detective to act in some new vendetta, for this uncle once headed the Mani's most significant criminal enterprise. Instead, Kouros learns the family is about to become rich through the sale of its property - until the uncle is killed, and thus the deal. Acting swiftly to head off a new cycle of violence, Kouros satisfactorily solves the murder. Or so it seems until, back in Athens, Kaldis' probe into deeply entrenched government corruption leads straight back to the Mani. Both cops now confront a host of unexpected twists, unanticipated players, unanswered questions - and people yet to die.

Jeffrey Siger was born and raised in Pittsburgh, Pennsylvania, practiced law at a major Wall Street law firm, and later established his own New York City law firm where he continued as one of its name partners until giving it all up to write full-time among the people, life, and politics of his beloved Mykonos. The Mykonos Mob is the tenth novel in his internationally best-selling and award nominated Chief Inspector Andreas Kaldis series, following up on An Aegean April, Santorini Caesars, Devil in Delphi, Sons of Sparta, Mykonos After Midnight, Target: Tinos, Prey on Patmos, Assassins of Athens, and Murder in Mykonos.The New York Times described Jeffrey Siger's novels as "thoughtful police procedurals set in picturesque but not untroubled Greek locales," and named him as Greece's thriller writer of record. The Greek Press called his work "prophetic," Eurocrime described him as a "very gifted American author...on a par with other American authors such as Joseph Wambaugh or Ed McBain," and the City of San Francisco awarded him its Certificate of Honor citing that his "acclaimed books have not only explored modern Greek society and its ancient roots but have inspired political change in Greece." He now lives in Greece.