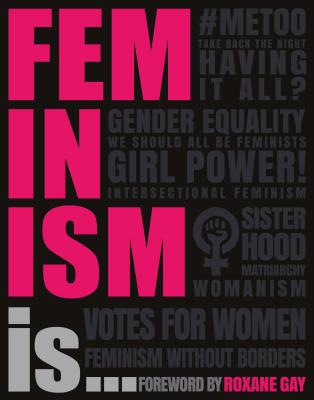 By DK, Roxane Gay (Foreword by)


NOT AVAILABLE
"This book is something I wish I could have read when I was younger." --Roxane Gay, from the foreword of Feminism Is...

It didn't just start with #MeToo. Today's feminism is more diverse than ever before and asks all kinds of questions. Combining insightful text with graphic illustrations, Feminism Is...tackles topics including intersectionality, the gender pay gap, the male gaze, and mansplaining.

Find out what equality for women really means, get a short history of feminism, and take a look at the concerns affecting women at work, in the home, and around sex and identity. Get answers to the big issues and meet some of the most groundbreaking feminists like Audre Lorde and bell hooks.

Addressing ongoing feminist concerns and including an original foreword by Roxane Gay, Feminism Is... takes on important themes in informative, thought-provoking ways.
Foreword writer: Roxane Gay's writing appears in Best American Mystery Stories 2014, Best American Short Stories 2012, Best Sex Writing 2012, A Public Space, McSweeney's, Tin House, Oxford American, American Short Fiction, Virginia Quarterly Review, and many others. She is a contributing opinion writer for the New York Times. She is the author of the books Ayiti, An Untamed State, the New York Times bestselling Bad Feminist, the nationally bestselling Difficult Women and the New York Times bestselling Hunger. She is also the author of World of Wakanda for Marvel. She has several books forthcoming and is also at work on television and film projects.