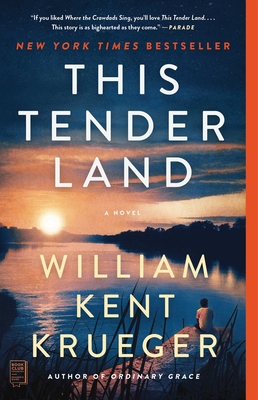 “If you liked Where the Crawdads Sing, you’ll love This Tender Land...This story is as big-hearted as they come.” —Parade

The unforgettable story of four orphans who travel the Mississippi River on a life-changing odyssey during the Great Depression.

In the summer of 1932, on the banks of Minnesota’s Gilead River, Odie O’Banion is an orphan confined to the Lincoln Indian Training School, a pitiless place where his lively nature earns him the superintendent’s wrath. Forced to flee after committing a terrible crime, he and his brother, Albert, their best friend, Mose, and a brokenhearted little girl named Emmy steal away in a canoe, heading for the mighty Mississippi and a place to call their own.

Over the course of one summer, these four orphans journey into the unknown and cross paths with others who are adrift, from struggling farmers and traveling faith healers to displaced families and lost souls of all kinds. With the feel of a modern classic, This Tender Land is an enthralling, big-hearted epic that shows how the magnificent American landscape connects us all, haunts our dreams, and makes us whole.
William Kent Krueger is the New York Times bestselling author of This Tender Land, Ordinary Grace (winner of the Edgar Award for best novel), as well as nineteen acclaimed books in the Cork O’Connor mystery series, including Lightning Strike and Desolation Mountain. He lives in the Twin Cities with his family. Learn more at WilliamKentKrueger.com.

Praise for This Tender Land

“If you liked Where the Crawdads Sing, you’ll love This Tender Land by best-selling author William Kent Krueger. This story is as big-hearted as they come.“ —Parade Magazine

“A picaresque tale of adventure during the Great Depression. Part Grapes of Wrath, part Huckleberry Finn, Krueger’s novel is a journey over inner and outer terrain toward wisdom and freedom.” —Minneapolis Star Tribune

“Crafted in exquisitely beautiful prose, this is a story to be treasured – outstanding and unforgettable.” —Historical Novel Review

"If you’re among of the millions who raced through Where the Crawdads Sing this year and are looking for another expansive, atmospheric American saga, look to the latest from Kreuger." —Entertainment Weekly

"Long, sprawling, and utterly captivating, readers will eat up every delicious word of it.” —New York Journal of Books

"Rich with graceful writing and endearing characters...this is a book for the ages." —Denver Post

Praise for Ordinary Grace, winner of the 2014 Edgar Award for Best Novel

"Pitch-perfect...I loved this book.” —Dennis Lehane, New York Times bestselling author of Live by Night and The Given Day

“Once in a blue moon a book drops down on your desk that demands to be read. You pick it up and read the first page, and then the second, and you are hooked. Such a book is Ordinary Grace…This is a book that makes the reader feel better just by having been exposed to the delights of the story. It will stay with you for quite some time and you will always remember it with a smile.” —Huffington Post