A Moment of Silence: Midnight III (The Midnight Series #3) (Paperback) 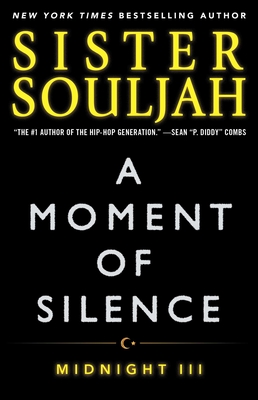 A Moment of Silence: Midnight III (The Midnight Series #3) (Paperback)

This is book number 3 in the The Midnight Series series.

In this electrifying novel, New York Times bestselling author and “an important voice in American literature” (Jada Pinkett Smith) Sister Souljah returns to the story of her beloved character, Midnight.

Handsome, young, Muslim, and married to two women living in one house along with his mother, Umma, and sister, Naja: can Midnight manage all that he has on his plate? He is surrounded by Americans who don’t share or understand his faith or culture, and adults who are offended by his maturity, intelligence, and his natural ability to make his hard work turn into real money. He is calm, confident, and cool, Ninja-trained and powerful, but one moment of rage throws this Brooklyn youth into a dark world of dirty police, gangs, guns, drugs, prisons, and dangerous inmates. Everything he ever believed, every dollar he ever earned, and all of the women he ever loved—including his mother—are at risk.

Will his manhood be taken, broken, or altered? Can he maintain his faith? Outnumbered, overruled, and deeply envied—how can he possibly survive? Will the streets convert him? What can he keep? What must he lose?
Sister Souljah is a graduate of Rutgers University. During her college years, she was known for her powerful voice, sharp political analysis, cultural allegiance, community organizing, and for her humanity. Post-graduation, Sister Souljah earned the love and support of her African American community by creating a national youth and student movement. She is credited for serving homeless families, creating academic, cultural, and recreational after-school programs, weekend academies, and sleep-away summer camps. Partnering with major mainstream celebrities, she provided her efforts free to all young people and families in need. A multidimensional woman, Souljah was the only female performing artist and voice of Public Enemy. She is also a wife and a mother. A storyteller who makes the entire world her home, she lives wherever she is “pushing her pen.”
"At a time when manhood is misrepresented, misunderstood and under attack, Souljah provides the blueprint of manhood through a fictional character named MIDNIGHT."
— Husain Abdullah, Kansas City Chiefs, NFL

In this exquisite picture book, there need be only a few words - boy, boat, journey equals ........magic! In the hands of master storytellers, the brothers Fan have simply created a masterpiece where we will be transported to the mesmerizing magical wonders in this book. A true stunner!