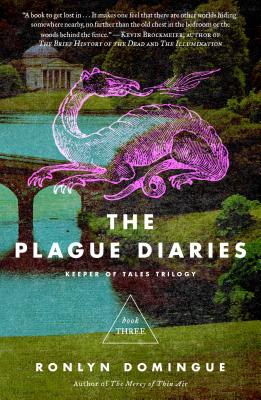 By Ronlyn Domingue
$28.60
Hard to Find - Not Available

This is book number 3 in the The Keeper of Tales Trilogy series.

The astounding, epic conclusion to the Keeper of Tales Trilogy brings together the cryptic prophecy in The Mapmaker’s War and the troubling mysteries in The Chronicle of Secret Riven—leading to an unforgettable reckoning between lies and truth.

We are all born made of gold.

Secret Riven—the mystically gifted heroine who now represses her uncanny telepathic power—works for the mysterious magnate Fewmany as an archivist in his private library. There, she stumbles upon the arcane manuscript that had vanished following her mother’s untimely death. She suspects the manuscript contains a profound secret, and she is yet unaware of its link to a thousand-year-old war and her own family’s legacy.

The tasks before her are clear: Secret must finally learn what Fewmany wants from her as well as the meaning of a strange symbol she’s dreamed of since childhood. At last, she must confront the questions haunting her and depart on a quest to find the truth about herself, her dead mother, and her fate—to unleash a Plague of Silences meant to destroy, and transform, the world as all have known it.

A dazzling, genre-bending masterwork, The Plague Diaries illuminates the power of our choices, the scars they leave, and the wounds they heal.

"The Plague Diaries gives readers the ultimate experience--a uniquely gifted heroine, a mystery that unravels with spellbinding intrigue, and an escape into a world lush with magical detail. Readers searching for a finely written and compelling genre-bender of a novel, here it is. Enjoy."
— Julia Fierro, author of The Gypsy Moth Summer

“The Plague Diaries is a book to get lost in. Intricately imagined, deeply felt, it offers up a rich display of distinct personalities: orphans and kings, parents and children, all with their own dark secrets. More than that, though, like all the best fantasies, it makes one feel that there are other worlds hiding somewhere nearby, no farther than the old chest in the bedroom or the woods behind the fence.”
— Kevin Brockmeier, author of The Brief History of the Dead and The Illumination

“Ms. Domingue has written a terrifically paced, beautifully textured novel to complete her Keeper of Tales Trilogy. She has given us a fantastical adventure, populated by finely drawn characters and charted with marvelous plot twists. But also a deeply felt, melancholic undertow that makes this world more like our own than we at first realize, and more vivid because of it.”
— Nicholas Christopher, author of A Trip to the Stars

Praise for The Chronicle of Secret Riven:

“In Secret's world, anything can happen.”
— Publishers Weekly

Praise for The Mapmaker's War:

“A map can make sense out of the seen world. But it can also evoke greed. And what of a map of the heart? Legend, allegory, fantasy—this second novel by Domingue entwines genres to cast a spell upon its reader.... A curious, thought-provoking story about how the heart’s terrain bears charting, too.”
— Kirkus Reviews on The Mapmaker's War