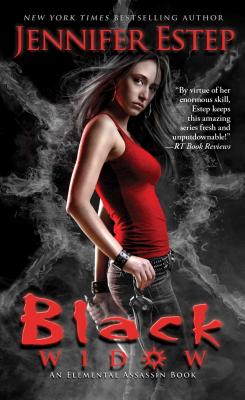 This is book number 12 in the Elemental Assassin series.

There’s nothing worse than a cruel, cunning enemy with time to kill—and my murder to plan. With wicked Fire elemental Mab Monroe long gone, you’d think I could finally catch a break. But someone’s always trying to take me down, either as Gin Blanco or my assassin alter-ago. Now along comes the Spider’s new arch-nemesis, the mysteriously named M. M. Monroe, who is gleefully working overtime to trap me in a sticky web of deceit.

The thing is, I’m not the only target. I can see through the tangled threads enough to know that every bit of bad luck my friends have been having lately is no accident—and that each unfortunate “coincidence” is just one more arrow drawing ever closer to hitting the real bull’s-eye. Though new to Ashland, this M. M. Monroe is no stranger to irony, trying to get me, an assassin, framed for murder. Yet, as my enemy’s master plan is slowly revealed, I have a sinking feeling that it will take more than my powerful Ice and Stone magic to stop my whole life from going up in flames.
Jennifer Estep is a New York Times and USA Today bestselling author prowling the streets of her imagination in search of her next fantasy idea. Spider’s Bite, Web of Lies, Venom, Tangled Threads, Spider’s Revenge, By a Thread, Widow’s Web, Deadly Sting, Heart of Venom, The Spider, Poison Promise, Black Widow, Spider’s Trap, Bitter Bite, Unraveled, and Snared, along with the e-shorts Thread of Death, Parlor Tricks, Kiss of Venom, Unwanted, and Nice Guys Bite are the other works in her red-hot Elemental Assassin urban fantasy series. Jennifer is also the author of the Black Blade and Mythos Academy young adult urban fantasy series and the Bigtime paranormal romance series. For more on Jennifer and her books, visit her at JenniferEstep.com and @Jennifer_Estep.

"Everything is that I adore about this series is right here and more so in Black Widow. There's expertly crafted fights, banter, and suspense that continued to keep me on the edge of my seat. I can't recommend this book enough and love being on the roller coaster ride that is Gin Blanco life.”
— —All Things Urban Fantasy

"Black Widow is crazy good and Gin Blanco is still one of the best written heroines in urban fantasy. I was riveted from beginning to end."
— —Fiction Vixen

“Gin Blanco is one of the most intriguing heroines on the scene. . . . If you have not gotten on the Gin bandwagon yet, do so today!”
— —RT Book Reviews

“This series kicked off with a bang, and the action hasn’t let up since.”
— —Fresh Fiction