Skunk Works: A Personal Memoir of My Years at Lockheed (Compact Disc) 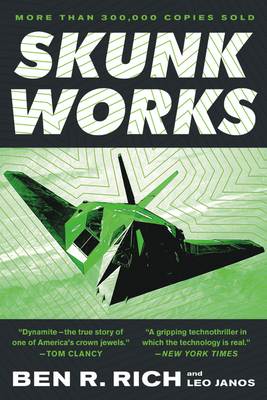 Skunk Works: A Personal Memoir of My Years at Lockheed (Compact Disc)


NOT AVAILABLE
From the development of the U-2 to the stealth fighter, the never-before-told story behind America's high-stakes quest to dominate the skies, Skunk Works is the true story of America's most secret and successful aerospace operation.As recounted by Ben Rich, the operation's brilliant boss for nearly two decades, the chronicle of Lockheed's legendary Skunk Works is a drama of Cold War confrontations and Gulf War air combat, of extraordinary feats of engineering and human achievement against fantastic odds. Here are up-close portraits of the maverick band of scientists and engineers who made the Skunk Works so renowned. Filled with telling personal anecdotes and high adventure, with narratives from the CIA and from Air Force pilots who flew the many classified, risky missions, this book is a riveting portrait of the most spectacular aviation triumphs of the twentieth century.