Where Things Come Back (MP3 CD) 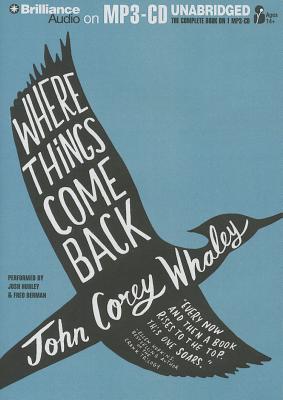 By John Corey Whaley, Josh Hurley (Read by), Fred Berman (Read by)
Not available
Not Available to Order - Hard to Find

In the remarkable, bizarre, and heart-rending summer before Cullen Witter's senior year of high school, everything he thinks he understands about his small and painfully dull Arkansas town vanishes. His cousin overdoses; his town becomes absurdly obsessed with the alleged reappearance of an extinct woodpecker; and most troubling of all, his sensitive, gifted fifteen-year-old brother, Gabriel, suddenly and inexplicably disappears.

As Cullen navigates a summer of finding and losing love, holding his fragile family together, and muddling his way into adulthood, a young, disillusioned missionary in Africa searches for meaning wherever he can find it. And when those two stories collide, a surprising and harrowing climax emerges that is tinged with melancholy and regret, comedy and absurdity, and above all, hope.