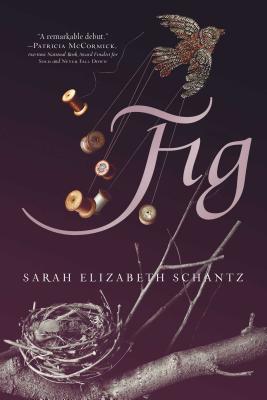 Love and sacrifice intertwine in this brilliant debut of rare beauty about a girl dealing with her mother’s schizophrenia and her own mental illness.

But as she watches Mama slowly come undone, it becomes hard to tell what is real and what is not, what is fun and what is frightening. To save Mama, Fig begins a fierce battle to bring her back. She knows that her daily sacrifices, like not touching metal one day or avoiding water the next, are the only way to cure Mama.

The problem is that in the process of a daily sacrifice, Fig begins to lose herself as well, increasingly isolating herself from her classmates and engaging in self-destructive behavior that only further sets her apart.

Spanning the course of Fig’s childhood from age six to nineteen, this deeply provocative novel is more than a portrait of a mother, a daughter, and the struggle that comes with all-consuming love. It is an acutely honest and often painful portrayal of life with mental illness and the lengths to which a young woman must go to handle the ordeals—real or imaginary—thrown her way.
Sarah Elizabeth Schantz grew up in a bookstore named The Rue Morgue—one of the first mystery bookstores in the US. She is an accomplished short-storyist, with many awards under her belt. Schantz holds an MFA in Writing & Poetics from Naropa University. She currently lives with her family in an old farmhouse on the outskirts of Boulder, Colorado, where they are surrounded by open sky, century-old cottonwoods, coyote, and screech owls. Fig is her first novel.
** STARRED REVIEW ** "In a novel rich with metaphors, newcomer Schantz explores the tender, heartwrenching relationship between a schizophrenic mother and her highly gifted daughter. The beautiful and remote rural setting underscores Fig’s isolation among classmates who view her family as strange and her joy during fleeting moments when her mother appears to be cured. Readers will get a strong sense of the powerful bond of love between parents and child as Fig’s family strives to navigate the quagmire of mental illness."
— Publishers Weekly, *STARRED REVIEW*

"Schantz gives readers insight into mental illness and how it affects the people around those who suffer from it. As Fig grows from six years old to an adult, she deals with her mother’s illness in both healthy and unhealthy ways. Readers soon realize that Fig is dealing with her own mental illness. Schantz’s portrayal of this complicated relationship and fight, both within the character of Fig and with her mother, is touching and unsettling at the same time. It is beautifully painful to experience."
— VOYA

“Somehow both lyrical and searing, Fig portrays all the fear and confusion and loneliness of living with an unstable parent. And yet, this book offers a redemption that is as honest as it is believable. A remarkable debut.”
— Patricia McCormick, Two-time National Book Award Finalist for Sold and Never Fall Down

"A thought-provoking debut that gives voice to children coping with the hardships of being raised in families afflicted by mental illness. By merging reality and fantasy, Fig delivers an authentic portrayal of sacrifice, strength, and, ultimately, love. This is a story that needed to be told."
— Kristen-Paige Madonia, author of Fingerprints of You

"Sarah Elizabeth Schantz's words are so beautiful they hurt. This is an astonishing debut novel—and one not only for young adults, but for all adults. At the heart —and very much the soul—of the book’s powerful narrative is Fig, her voice as authentic at six as it is at eleven. I felt a sense of loss at the end and wanted to keep on reading and reading...Fig is destined to become a classic. Truly the most memorable book I have read in years."
— Agatha Award-winning author, Katherine Hall Page

“In Fig, Sarah Elizabeth Schantz has written a spectacular debut of rare beauty and courage. This fascinating journey into a young child's mind is both haunting and electrifying. Fig is one of the best books I’ve read in years, and Fig’s unique voice will stay with me forever.”
— Lauren Sabel, author of Vivian Divine Is Dead

"This beautifully written story is a painful look at mental illness. An element of fantasy weaves throughout the narrative, with Annie’s tenuous grip on reality and Fig’s magical thinking, and references to fairy tales, The Wizard of Oz, and Alice in Wonderland abound.... an incredibly haunting story about mental illness and family bonds."
— School Library Journal

"It’s a rare debut from an author that bares the soul not only of the characters,but of the reader as well."
— Jeff Pfaller