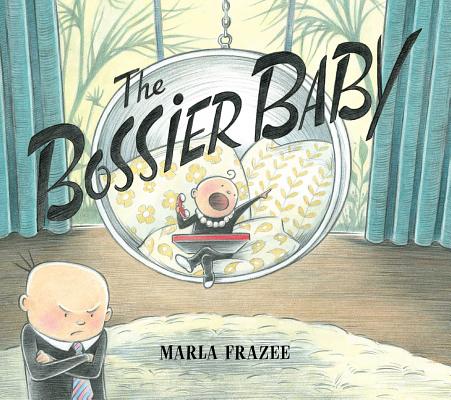 Change is in the air—the Boss Baby’s staff has stopped taking his direction! It seems that there is a new CEO in town; from the moment she comes home, Boss Baby’s little sister is extremely loud and is demanding all sorts of corporate perks he never got. Can the Boss Baby and his staff get used to the new corporate structure?

A new baby sister hands the Boss Baby a demotion.Although this title introduces a new eponymous infant CEO, it, like its predecessor (2010), remains focused on Boss Baby himself. Frazee's text employs a tongue-in-cheek corporatese, which is matched by the Mad Men-esque modern aesthetic of the pencil-and-gouache illustrations. Combined, words and pictures first convey that the Boss Baby's diaper is in a twist over his black-pantsuit-and-pearls-clad baby sister's arrival. "The staff" (their parents) "was strangely delighted" reads the droll text, and her many "perks" compound his misery. Accompanying illustrations show the white baby girl soaking up her parents' adoration while enjoying "the organic catering service" (nursing), "aromatherapy" (diapering), and so on. After the ousted boss acts out and then retreats to sulk, it's the Bossier Baby who literally reaches out to her big brother. After all, "she wasn't CEO for nothing!" An excellent wordless spread shows her reaching up to a shocked Boss Baby, who scoops her up into his arms on the facing page. This snuggle gives way to a scene of domestic bliss with the siblings reading together on the next spread as "the staff" gazes at them adoringly. In a trademark Frazee final page turn, a satisfying conclusion rooted in reality shows that it's not all bliss in the baby boardroom. Someone give Frazee a raise. (Picture book. 3-6)
— Kirkus, STARRED REVIEW

A new baby sister has arrived to challenge bespoke-suited Boss Baby’s (first seen in Frazee's The Boss Baby, 2010) dominant position in the home. This infant executive, complete with a laptop and dressed in pearls and a ruffled onesie, has implemented a business plan to restructure the organization from the top down. With her promotion to CEO, her big brother angrily gathers up his toys and stumbles off, demoted and out-bossed. He realizes in abject misery that the staff (aka his parents) seem strangely delighted with the tantrum-throwing hellion. She is fed, cuddled, photographed, and entertained, and her private pram limo exceeds any perks the Boss Baby ever had. Furious, he tries outrageous antics, stripping his clothes off in the street and peeing on the flowers, but no one notices. Discouraged, he crawls into a corner, crying in abject misery. Sensing a breakdown in productivity, the Bossier Baby seeks him out and soothes him, and the company is back to business (at least most of the time.) Frazee’s hilarious artwork in black Prismacolor pencil and gouache captures the challenges and emotions experienced at the arrival of a new sibling. Her wry satire on parenting and family dynamics cleverly captures a child’s feelings in this comical blend of words and pictures. Sheer delight. — Lolly Gepson
— Booklist, STARRED REVIEW

The Boss Baby (rev. 7/10) finds himself sidelined when a new CEO, a string of pearls adding just the right touch to her sleek black onesie, takes over. This Bossier Baby commands more of the staff’s devotion than the Boss ever did (or so it seems to him), and he responds by acting out—“watering” the flowers, for example, with pee. The Dethronement Blues (as Zena used to call them) have proved a durable theme in picture books; Frazee composes a brisk and snappy variation that resists sentimentality until the end, where even the expected alliance of Boss and Bossier gets a little bonk on the head. Everything is round and witty in the pencil and gouache illustrations. If The Boss Baby was mainly for new parents, this companion volume will engage new big sisters and brothers as well.
— Horn Book *STARRED REVIEW*

In The Boss Baby, Frazee compared first-time parenthood to life under a tiny, bald corporate chief in a one-piece suit. Every bit as funny as its predecessor, this sequel presents the dramatic shake-up after the arrival of the Boss Baby’s infant sister, who “restructure[s] the organization... from the top down.” The new CEO accessorizes her black onesie with a string of chewable pearls, carries an Etch-a-Sketch like a laptop, and “was bossier than the Boss Baby had ever been. Which seems impossible.” The demoted Boss Baby glowers as “the staff” dotes on the CEO and ignores his attention-seeking behavior. Frazee excels at locating the humor in trying situations in her always lovely pencil-and-gouache artwork, picturing the independent toddler stripping naked and peeing on a bed of flowers while his oblivious parents coo at the CEO in her fancy stroller, aka “the private limo.” Elder siblings and parents alike will recognize the tensions that come with a growing family, and the just-sweet-enough resolution proves that this CEO knows how to negotiate a takeover with savvy. Up to age 8.

This sophisticated sequel to Boss Baby provides comeuppance for the tyrannical infant, who is now a toddler. A new baby sister arrives with a Kewpie doll curl and a string of pearls, confident enough to usurp authority at every turn. Her organic catering demands (nursing), aromatherapy (diaper disposal), and afternoon spinning (turning in a jumpy bouncer) result in a media frenzy in which her brother, aka Boss Baby, is ignored. When his outrageous attempt to grab attention by stripping in public and weeing in a garden is ignored, he resigns himself to sulking in a corner at home. Bossier Baby is a wise CEO and extends hugging arms to her brother, creating teamwork and tranquility in the family. The comical pencil and watercolor drawings in mid-century style embellish the business lingo text. VERDICT Great fun for hip readers familiar with terms like stress management and social media team.
— School Library Journal

This follow-up to "The Boss Baby"--coming out as a film in the spring--will please new and old devotees.  A pearl-wearing baby arrives at the little proto-corporate-tyrant's house, declaring herself the C.E.O.  The staff is "strangely delighted."  The demoted Boss Baby tries some protest moves (stripping, peeing outside), all futile, until the C.E.O. reaches out to bond with him.  As always, Frazee makes it adorable, witty, and clever, down to the details of the family's midcentury modern showpiece home.
— The New York Times Book Review

Marla Frazee returns to a familiar corporate setting just as a new CEO takes over in "The Bossier Baby," a sequel to 2010's "The Boss Baby" that's even funnier.  Our sympathies here lie with the old boss, a pint-sized manager who wears a tie with his black onesie and who reels back when a smaller version of himself strolls in wearing a string of pearls. "The first thing the new executive did was outline her business plan and restructure the organization," we learn, as the newcomer dazzles her awed parents in one pencil-and-gouache illustration, while, in the next, she establishes physical dominance over the outgoing leader.
— The Wall Street Journal