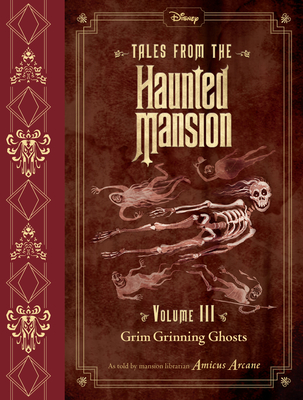 Welcome, foolish mortal, to the Haunted Mansion. The grim grinning ghosts have come out to socialize-and hear more spooky stories from beyond the grave. Join them?if you dare!

The eerie Amicus Arcane has returned from beyond the grave to share more spooky stories from inside the Haunted Mansion. What frightening fictions does this once-living librarian hold in store? And will you, foolish reader, be brave enough to listen to them all without going mad...or dying from fright? Join Phineas, Ezra, and Gus-otherwise known as the Hitchhiking Ghosts-as they venture into Amicus Arcane's lonesome library for more terrifying Tales from the Haunted Mansion!

Amicus Arcane Little is known about the dearly departed Amicus Arcane, save for his love of books. As the mansion librarian, both in this life and in the afterlife, Amicus has delighted in all forms of the written word. However, this librarian's favorite tales are those of terror and suspense. After all, there is nothing better to ease a restless spirit than a frightfully good ghost story.

John Esposito When John Esposito met Amicus Arcane on a midnight stroll through New Orleans Square, he was so haunted by the librarian's tales that he decided to transcribe them for posterity. John has worked in both film and television, on projects such as Stephen King's Graveyard Shift, R. L. Stine's The Haunting Hour, Teen Titans, and the Walking Dead web series, for which he won consecutive Writer's Guild Awards. John lives in New York with his wife and children and still visits with Amicus from time to time.

Kelley Jones For the illustrations accompanying his terrifying tales, Amicus Arcane approached Kelley Jones, an artist with a scary amount of talent. Kelley has worked for every major comic book publisher but is best known for his definitive work on Batman for DC Comics. Kelley lives in Northern California with his wife and children and hears from Amicus every October 31, whether he wants to or not.

An utterly delightful rom-com that has thoughtful Janna, soon to be starting college in the fall, coordinating her brother's almost-wedding ceremony with friends, family and a trio of possible love interests. A hysterically funny first chapter -- literally laugh-out-loud - will pull readers in immediately to stand by Janna as she navigates her faith, family struggles and heart in this strong follow-up sequel to her debut Saints and Misfits. - Reviewed by Maureen