The Right Side: A Novel (Paperback) 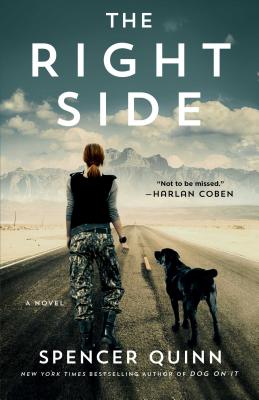 The Right Side: A Novel (Paperback)


Recently On Our Shelves
In this "brilliant...deeply felt" (Stephen King) novel by the New York Times bestselling author of the Chet and Bernie mystery series, a deeply damaged female soldier home from the war in Afghanistan becomes obsessed with finding a missing girl, gains an unlikely ally in a stray dog, and encounters new perils beyond the combat zone.

LeAnne Hogan went to Afghanistan as a rising star in the military, and came back a much lesser person, mentally and physically. Now missing an eye and with half her face badly scarred, she can barely remember the disastrous desert operation that almost killed her. She is confused, angry, and suspects the fault is hers, even though nobody will come out and say it.

Shattered by one last blow—the sudden death of her hospital roommate, Marci—LeAnne finds herself on a fateful drive across the country, reflecting on her past and seeing no future. Her native land is now unfamiliar, recast in shadow by her one good eye, her damaged psyche, her weakened body. Arriving in the rain-soaked small town in Washington State that Marci called home, she makes a troubling discovery: Marci’s eight-year-old daughter has vanished. When a stray dog—a powerful, dark, unreadable creature, no one’s idea of a pet—seems to adopt LeAnne, a surprising connection is formed and something shifts inside her. As she becomes obsessed with finding Marci’s daughter, LeAnne and her inscrutable canine companion are drawn into danger as dark and menacing as her last Afghan mission. This time she has a strange but loyal fellow traveler protecting her blind side.

Enthralling, suspenseful, and psychologically nuanced, The Right Side introduces one of the most unforgettable protagonists in modern fiction: isolated, broken, disillusioned—yet still seeking redemption and purpose. As Harlan Coben raves, this is "a great suspense novel, and so much more. You won't forget the heroic LeAnne Hogan—and the same goes for her dog! Not to be missed."
Spencer Quinn is the bestselling author of eight Chet and Bernie mystery series, as well as the #1 New York Times bestselling Bowser and Birdie series for middle-grade readers. He lives on Cape Cod with his wife Diana—and dogs Audrey and Pearl. Keep up with him by visiting SpenceQuinn.com.
"Brilliant. Deeply felt, but totally under control. I loved it."
— Stephen King

"A great suspense novel, and so much more. You won't forget the heroic LeAnne Hogan -- and the same goes for her dog! Not to be missed."
— Harlan Coben

"Perfectly detailed...Quinn realistically depicts the way civilians fail to comprehend a warrior's mindset. The despondency of PTSD [is] portrayed with such brutal intensity...a psychological drama."
— Kirkus

"Read this book."
— The Bark Magazine