The Outsider: A Novel (Mass Market) 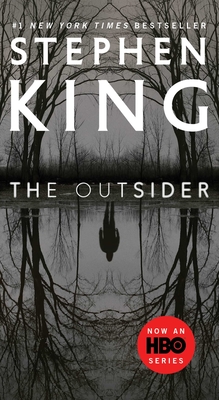 The Outsider: A Novel (Mass Market)

Evil has many faces…maybe even yours in this #1 New York Times bestseller from master storyteller Stephen King.

An eleven-year-old boy’s violated corpse is discovered in a town park. Eyewitnesses and fingerprints point unmistakably to one of Flint City’s most popular citizens—Terry Maitland, Little League coach, English teacher, husband, and father of two girls. Detective Ralph Anderson, whose son Maitland once coached, orders a quick and very public arrest. Maitland has an alibi, but Anderson and the district attorney soon have DNA evidence to go with the fingerprints and witnesses. Their case seems ironclad.

As the investigation expands and horrifying details begin to emerge, King’s story kicks into high gear, generating strong tension and almost unbearable suspense. Terry Maitland seems like a nice guy, but is he wearing another face? When the answer comes, it will shock you as only Stephen King can.
Stephen King is the author of more than sixty books, all of them worldwide bestsellers. His recent work includes Fairy Tale, Billy Summers, If It Bleeds, The Institute, Elevation, The Outsider, Sleeping Beauties (cowritten with his son Owen King), and the Bill Hodges trilogy: End of Watch, Finders Keepers, and Mr. Mercedes (an Edgar Award winner for Best Novel and a television series streaming on Peacock). His novel 11/22/63 was named a top ten book of 2011 by The New York Times Book Review and won the Los Angeles Times Book Prize for Mystery/Thriller. His epic works The Dark Tower, It, Pet Sematary, and Doctor Sleep are the basis for major motion pictures, with It now the highest-grossing horror film of all time. He is the recipient of the 2020 Audio Publishers Association Lifetime Achievement Award, the 2018 PEN America Literary Service Award, the 2014 National Medal of Arts, and the 2003 National Book Foundation Medal for Distinguished Contribution to American Letters. He lives in Bangor, Maine, with his wife, novelist Tabitha King.