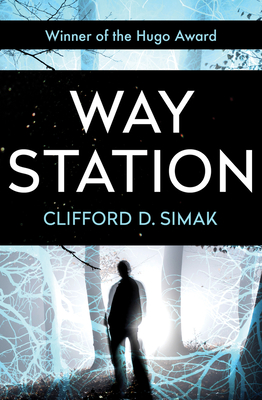 By Clifford D. Simak
$16.99
Available to Order from Our Warehouse

Enoch Wallace is not like other humans. Living a secluded life in the backwoods of Wisconsin, he carries a nineteenth-century rifle and never seems to age--a fact that has recently caught the attention of prying government eyes. The truth is, Enoch is the last surviving veteran of the American Civil War and, for close to a century, he has operated a secret way station for aliens passing through on journeys to other stars. But the gifts of knowledge and immortality that his intergalactic guests have bestowed upon him are proving to be a nightmarish burden, for they have opened Enoch's eyes to humanity's impending destruction. Still, one final hope remains for the human race . . . though the cure could ultimately prove more terrible than the disease.

Winner of the Hugo Award for Best Novel, Way Station is a magnificent example of the fine art of science fiction as practiced by a revered Grand Master. A cautionary tale that is at once ingenious, evocative, and compassionately human, it brilliantly supports the contention of the late, great Robert A. Heinlein that "to read science-fiction is to read Simak."

During his fifty-five-year career, Clifford D. Simak produced some of the most iconic science fiction stories ever written. Born in 1904 on a farm in southwestern Wisconsin, Simak got a job at a small-town newspaper in 1929 and eventually became news editor of the Minneapolis Star-Tribune, writing fiction in his spare time. Simak was best known for the book City, a reaction to the horrors of World War II, and for his novel Way Station. In 1953 City was awarded the International Fantasy Award, and in following years, Simak won three Hugo Awards and a Nebula Award. In 1977 he became the third Grand Master of the Science Fiction and Fantasy Writers of America, and before his death in 1988, he was named one of three inaugural winners of the Horror Writers Association's Bram Stoker Award for Lifetime Achievement.