If You're Reading This (MP3 CD) 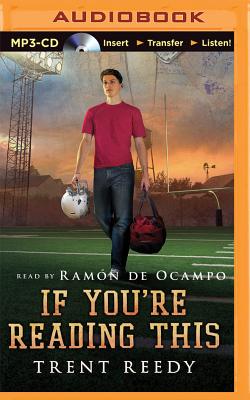 If You're Reading This (MP3 CD)

From the author of Words in the Dust and Divided We Fall A heartwarming book about a son reconnecting with the father he lost in Afghanistan.

Mike was seven when his father was killed in mysterious circumstances in Afghanistan. Eight years later, the family still hasn't recovered: Mike's mom is overworked and overprotective; his younger sister Mary feels no connection to the father she barely remembers; and in his quest to be "the man of the family," Mike knows he's missing out on everyday high school life.

Then, out of the blue, Mike receives a letter from his father--the first of a series Dad wrote in Afghanistan, just in case he didn't come home, meant to share some wisdom with his son on the eve of Mike's sixteenth birthday. As the letters come in, Mike revels in spending time with his dad again, and takes his encouragement to try new things--to go out for the football team, and ask out the beautiful Isma. But who's been keeping the letters all these years? And how did Dad actually die? As the answers to these mysteries are revealed, Mike and his family find a way to heal and move forward at last.