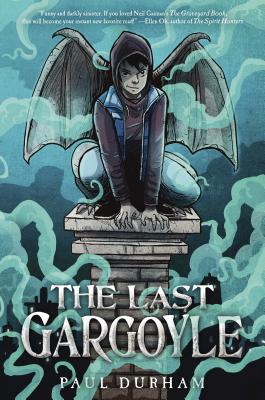 By Paul Durham
$18.69
Not Available - Possibly Out of Print

Fans of Percy Jackson will devour this hilarious adventure story of a brave gargoyle named Penhallow (Don't call him Goyle!) and his human friend Viola. Penhallow takes the protection of his Wards, the people living in the home he lives on, seriously and when a mysterious Boneless King starts releasing all the scary creatures that go bump in the night, it is his job to get to the bottom of the problem before it is too late. - Jessica

Fans of Jonathan Auxier's The Night Gardener and Neil Gaiman's The Graveyard Book will tremble with delight for this haunting tale about a lonely gargoyle who isn't alone at all.

Penhallow is the last of his kind. The stone gargoyle--he'd prefer you call him a grotesque--fearlessly protects his Boston building from the spirits who haunt the night. But even he is outmatched when Hetty, his newest ward, nearly falls victim to the Boneless King, the ruler of the underworld.

Then there's Viola, the mysterious girl who keeps turning up at the most unlikely times. In a world where nightmares come to life, Viola could be just the ally Penhallow needs. But can he trust her when every shadow hides another secret? Can he afford not to?

Paul Durham was raised in Massachusetts and went to college and law school in Boston--a city with a shortage of gargoyles even back then. His debut novel, The Luck Uglies, earned the Cybils Award for Middle Grade Speculative Fiction and was named an ALA-ALSC Notable Children's Book, a New York Public Library 100 Titles for Reading and Sharing selection, and a Kansas City Star Best Book of the Year.

Paul lives in New Hampshire with his wife, two daughters, and an enormous, bushy creature the local animal shelter identified as a cat. He can be found writing in an abandoned chicken coop at the edge of a swamp, online at pauldurhambooks.com, or on Facebook, Instagram, and Twitter at @pauldurhambooks. You can also listen to him tell fibs on his iTunes podcast, Telling Lies to Children.

Praise for The Last Gargoyle:

"Chills and chuckles abound. Just the right mix of humor and horror to spook but not terrify...readers will hope for a sequel." -Kirkus

"A bold, scrappy hero on a wild ride..this is a unique middle grade story that will appeal to fans of clever, introspective adventures." -Booklist

"Just the right amount of creep." -Bulletin of the Center for Children's Books

"School and public libraries should find space on their shelves for this fantasy title." -School Library Journal

"Funny and darkly sinister. If you loved Neil Gaiman's Graveyard Book, this will become your instant new favorite read!" -Ellen Oh, author of The Spirit Hunters