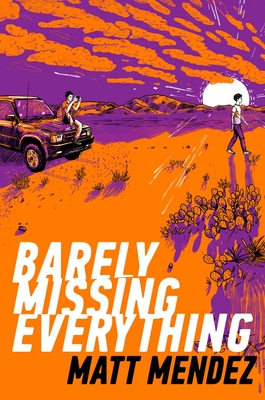 “There are moments when a story shakes you...Barely Missing Everything is one of those stories, and Mendez, a gifted storyteller with a distinct voice, is sure to bring a quake to the literary landscape.” —Jason Reynolds, New York Times bestselling author of Long Way Down

In the tradition of Jason Reynolds and Matt de la Peña, this heartbreaking, no-holds-barred debut novel told from three points of view explores how difficult it is to make it in life when you—your life, brown lives—don’t matter.

Juan has plans. He’s going to get out of El Paso, Texas, on a basketball scholarship and make something of himself—or at least find something better than his mom Fabi’s cruddy apartment, her string of loser boyfriends, and a dead dad. Basketball is going to be his ticket out, his ticket up. He just needs to make it happen.

His best friend JD has plans, too. He’s going to be a filmmaker one day, like Quinten Tarantino or Guillermo del Toro (NOT Steven Spielberg). He’s got a camera and he’s got passion—what else could he need?

Fabi doesn’t have a plan anymore. When you get pregnant at sixteen and have been stuck bartending to make ends meet for the past seventeen years, you realize plans don’t always pan out, and that there some things you just can’t plan for…

Like Juan’s run-in with the police, like a sprained ankle, and a tanking math grade that will likely ruin his chance at a scholarship. Like JD causing the implosion of his family. Like letters from a man named Mando on death row. Like finding out this man could be the father your mother said was dead.

Soon Juan and JD are embarking on a Thelma and Louise­–like road trip to visit Mando. Juan will finally meet his dad, JD has a perfect subject for his documentary, and Fabi is desperate to stop them. But, as we already know, there are some things you just can’t plan for…
Like his characters, Matt Mendez grew up in central El Paso, Texas. He received an MFA from the University of Arizona and is the author of the short story collection Twitching Heart. He lives in Tucson, Arizona. Barely Missing Everything was his debut young adult novel. You can visit him at MattMendez.com.


At once accessible and artful, this is an important book about Mexican teens holding onto hope and friendship.
— Kirkus Reviews, starred review

This searing portrait of two Mexican-American families conveys the experiences of a group that is underrepresented in YA fiction.
— Publishers Weekly

Mendez minces no words as he presents issues that are all too real for many Latin American communities. . . . Mendez's attention to raw detail in plot and diction is both painful and illuminating. With its shades of social justice, this will appeal to readers of Matt de la Peña and Jason Reynolds.
— Booklist

A cautiously optimistic message that changing course is not an impossibility.
— BCCB

A delightfully hilarious graphic novel starring a princess, and nail-clipping robot, and a cat who team up to save the moon (and Earth) from evil space rats!