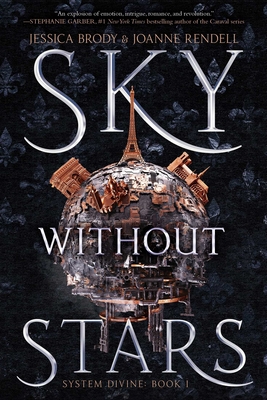 This is book number 1 in the System Divine series.

“Far into the future, humans have left earth and now inhabit The System Divine, with French colonists living on the planet Laterre, where citizens starve under the watch of an indifferent ruling class. But revolution is brewing, and three teens are drawn in as a terrorist group threatens to tear apart their home. Should they be fighting to save such a broken system, or should they be working to help the spark catch? Each must decide for themselves in this thrilling sci-fi retelling of Les Misérables.”
— Madeline Dorman, Blue Willow Bookshop, Houston, TX

In the tradition of The Lunar Chronicles, this sweeping reimagining of Les Misérables tells the story of three teens from very different backgrounds who are thrown together amidst the looming threat of revolution on the French planet of Laterre.

A thief.
An officer.
A guardian.

When the Last Days came, the planet of Laterre promised hope. A new life for a wealthy French family and their descendants. But five hundred years later, it’s now a place where an extravagant elite class reigns supreme; where the clouds hide the stars and the poor starve in the streets; where a rebel group, long thought dead, is resurfacing.

Chatine is a street-savvy thief who will do anything to escape the brutal Regime, including spy on Marcellus, the grandson of the most powerful man on the planet.

Marcellus is an officer—and the son of an infamous traitor. In training to take command of the military, Marcellus begins to doubt the government he’s vowed to serve when his father dies and leaves behind a cryptic message that only one person can read: a girl named Alouette.

Alouette is living in an underground refuge, where she guards and protects the last surviving library on the planet. But a shocking murder will bring Alouette to the surface for the first time in twelve years…and plunge Laterre into chaos.

All three have a role to play in a dangerous game of revolution—and together they will shape the future of a planet.
Jessica Brody is the author of several popular novels for teens and tweens, including The Geography of Lost Things, 52 Reasons to Hate My Father, A Week of Mondays, Better You Than Me, and the Unremembered trilogy. She lives with her husband and four dogs near Portland, Oregon. Visit her online at JessicaBrody.com.

Joanne Rendell is the author of three novels and holds a PhD in English literature. She teaches fiction writing to teens and kids and is a board member for the youth Shakespeare company New Genesis Productions. With her husband and son, Joanne divides her time between New York City and New Paltz, New York. Visit Joanne at JoanneRendell.com.
"I could fill an entire book detailing all the things I love about Sky Without Stars, from the epic tech to the immersive world-building, the jaw-dropping twists to the characters that universally stole my heart. This brilliant reinterpretation of a beloved classic is not to be missed!" -- Marissa Meyer, #1 New York Times bestselling author of The Lunar Chronicles

"An exquisitely executed reimagining. Epic in scope and storytelling, Sky Without Stars is an explosion of emotion, intrigue, romance, and revolution." -- Stephanie Garber, #1 New York Times bestselling author of the Caraval series

Les Miserables like you've never seen it before--this page-turning story rockets the classic through the stars and into your heart."--Beth Revis, New York Times bestselling author of Across the Universe and Star Wars: Rebel Rising

"Brody and Rendell masterfully craft a new take on an old favorite that’s out of this world, filled with drama, intrigue and romance. Loved!"-- Danielle Paige, New York Times Bestselling author of the Dorothy Must Die series and the Stealing Snow series

Reading All My Rage will take you gently by the hand, punch you in the gut, tear your heart out, cradle it tenderly then smash it to pieces leaving a violent roiling of emotions in its wake. Sabaa Tahir has carefully strung together words filled with devastating hope and the potential to reach readers through their own rage.