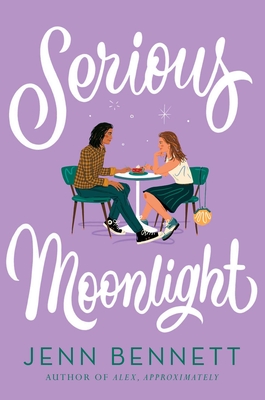 After an awkward first encounter, Birdie and Daniel are forced to work together in a Seattle hotel where a famous author leads a mysterious and secluded life in this romantic contemporary novel from the author of Alex, Approximately.

Mystery-book aficionado Birdie Lindberg has an overactive imagination. Raised in isolation and homeschooled by strict grandparents, she’s cultivated a whimsical fantasy life in which she plays the heroic detective and every stranger is a suspect. But her solitary world expands when she takes a job the summer before college, working the graveyard shift at a historic Seattle hotel.

In her new job, Birdie hopes to blossom from introverted dreamer to brave pioneer, and gregarious Daniel Aoki volunteers to be her guide. The hotel’s charismatic young van driver shares the same nocturnal shift and patronizes the waterfront Moonlight Diner where Birdie waits for the early morning ferry after work. Daniel also shares her appetite for intrigue, and he’s stumbled upon a real-life mystery: a famous reclusive writer—never before seen in public—might be secretly meeting someone at the hotel.

To uncover the writer’s puzzling identity, Birdie must come out of her shell…discovering that the most confounding mystery of all may be her growing feelings for the elusive riddle that is Daniel.
Jenn Bennett is an award-winning author of young adult books, including Alex, Approximately; Starry Eyes; The Lady Rogue; and Always Jane. She also writes historical romance and fantasy for adults. Her books have earned multiple starred reviews, won the Romance Writers of America’s RITA® Award, and been included on Publishers Weekly’s Best Books annual list. She currently lives near Atlanta with one husband and two dogs.

"Compulsively readable and enormously fun, this is a first purchase for YA collections." -- SLJ