That Thing about Bollywood (Paperback) 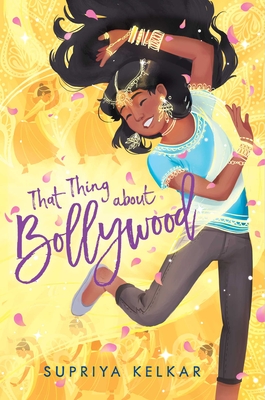 That Thing about Bollywood (Paperback)


Recently On Our Shelves
Bollywood takes over in this “effervescent” (Booklist) and magical middle grade novel about an Indian American girl whose world turns upside down when she involuntarily starts bursting into glamorous song-and-dance routines during everyday life.

You know how in Bollywood when people are in love, they sing and dance from the mountaintops? Eleven-year-old Sonali wonders if they do the same when they’re breaking up. The truth is, Sonali’s parents don’t get along, and it looks like they might be separating.

Sonali’s little brother, Ronak, is not taking the news well, constantly crying. Sonali would never do that. It’s embarrassing to let out so many feelings, to show the world how not okay you are. But then something strange happens, something magical, maybe. When Sonali gets upset during a field trip, she can’t bury her feelings like usual—instead, she suddenly bursts into a Bollywood song-and-dance routine about why she’s upset!

The next morning, much to her dismay, Sonali’s reality has shifted. Things seem brighter, almost too bright. Her parents have had Bollywood makeovers. Her friends are also breaking out into song and dance. And somehow, everyone is acting as if this is totally normal.

Sonali knows something has gone wrong, and she suspects it has something to do with her own mismanaged emotions. Can she figure it out before it’s too late?
Born and raised in the Midwest, Supriya Kelkar learned Hindi as a child by watching three Hindi movies a week. She is a screenwriter who has worked on the writing teams for several Hindi films and one Hollywood feature. Supriya’s books include Ahimsa, The Many Colors of Harpreet Singh, American as Paneer Pie, and That Thing about Bollywood, among others. Visit her online at SupriyaKelkar.com.

"A love letter to Bollywood that offers heartfelt encouragement to the lonely."
— Kirkus Reviews