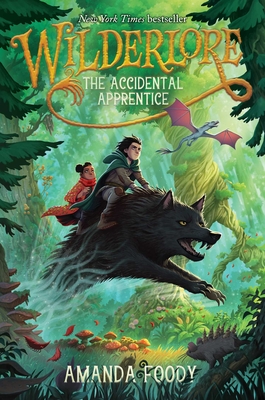 This is book number 1 in the Wilderlore series.

A boy who accidentally bonds with a magical Beast must set off on an adventure in the mysterious Woods in this “wholesome, delightful” (Kirkus Reviews, starred review), and cheeky middle grade fantasy debut—perfect for fans of Nevermoor and How to Train Your Dragon.

The last thing Barclay Thorne ever wanted was an adventure.

Thankfully, as an apprentice to the town’s mushroom farmer, Barclay need only work hard and follow the rules to one day become the head mushroom farmer himself. No danger required. But then Barclay accidentally breaks his town’s most sacred rule: never ever EVER stray into the Woods, for within the Woods lurk vicious magical Beasts.

To Barclay’s horror, he faces a fate far worse than being eaten: he unwittingly bonds with a Beast and is run out of town by an angry mob. Determined to break this bond and return home, Barclay journeys to find the mysterious town of Lore Keepers, people who have also bonded with Beasts and share their powers.

But after making new friends, entering a dangerous apprenticeship exam, and even facing the legendary Beast of the Woods, Barclay must make a difficult choice: return to the home and rules he’s always known, or embrace the adventure awaiting him.
Amanda Foody is the author of Daughter of the Burning City, The Shadow Game series, and the Wilderlore series. Formerly an accountant preparing taxes for multinational corporations, Amanda lives in Massachusetts with Jelly Bean, a feline beastly companion. Visit her at AmandaFoody.com.
* "Wholesome, delightful, and jam-packed with adventure."
— Kirkus Reviews, starred review

"Absolutely enchanting! Reminiscent of classic middle grade tales, with a highly unique and enthralling world and characters you can really root for."
— Claribel A. Ortega, author of The Ghost Squad

“Exciting, adventurous, and wild in its own right, The Accidental Apprentice had me riding on the winds and howling at the sky. When the wilds call, you should listen.”
— Sean Easley, author of The Hotel Between and The Key of Lost Things

“The world of Wildlerlore is breathtaking, immersive, and spellbinding—true adventure prowls in these pages. I would gladly wander the Wilderlands forever, bonding with all types of magical beasts. Readers everywhere will delight in collecting them all! This book is in a legendary class, says Lore Keeper Lauren (YES, I am a Lore Keeper now).”
— Lauren Magaziner, author of the Case Closed series and Wizardmatch