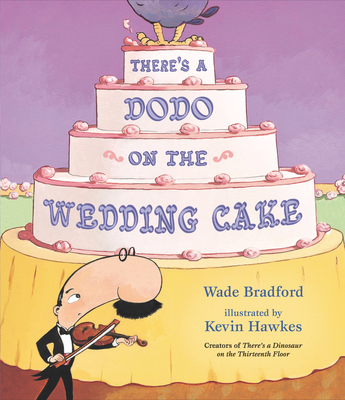 In a raucous sequel to There’s a Dinosaur on the 13th Floor, Mr. Snore is back at the hotel to play his violin at a wedding—where his valiant efforts to protect the elaborate cake go hilariously awry.

For his return visit to the wacky Sharemore Hotel, Mr. Snore will be playing his violin at a fancy wedding. As he waits for his cue to join the ceremony, he admires the wedding cake . . . and notices that he’s not alone in ogling that tower of frothy perfection. Is that a dodo, eating one of the frosting roses? As more and more creatures enter the scene—including two beavers, a boa constrictor, and a bunch of bats—it’s hard to tell who’s a guest and who's a pest. But Mr. Snore, rushing the cake trolley from room to room, is going to do his heroic best to save that prize from sure disaster. From author and playwright Wade Bradford and award-winning illustrator Kevin Hawkes comes a madcap encore to There’s a Dinosaur on the 13th Floor, starring the ever-proper Mr. Snore.
Wade Bradford teaches English at Moorpark College and is the author of the picture books There’s a Dinosaur on the 13th Floor, Papa Bear’s Page Fright, Why Do I Have to Make My Bed?, and Around the World in a Bathtub. He has also written more than thirty-five plays. Wade Bradford lives in Southern California.

Kevin Hawkes is the illustrator of many books for children, including the award-winning Library Lion by Michelle Knudsen; There’s a Dinosaur on the 13th Floor by Wade Bradford; A Little Bitty Man and Other Poems for the Very Young by Halfdan Rasmussen, translated by Marilyn Nelson and Pamela Espeland; The Three Mouths of Little Tom Drum by Nancy Willard; and Weslandia by Paul Fleischman. Kevin Hawkes lives with his family in southern Maine.
Comic, dramatic, fast-paced illustrations reveal well-intentioned Mr. Snore’s cascading mistakes as he heroically thrusts and parries his bow and frantically steers the cake trolley across the pages. Diverse animals dressed in wedding finery border on the absurd, but none match proper Mr. Snore and his hilariously monumental proboscis. . . . A riotous, rib-tickling comedy of errors.
—Kirkus Reviews

Kids will love poring over the detailed illustrations, looking for hidden jokes, and learning that things aren’t always as they seem.
—Brightly