Concrete: From the Ground Up (Material Marvels) (Hardcover) 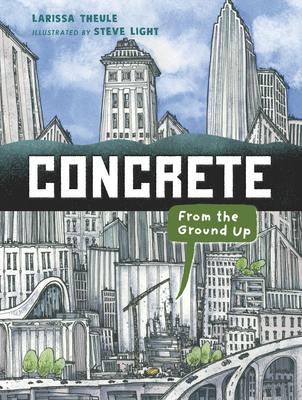 Concrete: From the Ground Up (Material Marvels) (Hardcover)


Recently On Our Shelves
A stylish, eye-opening, utterly engaging, and often wry look at one of the marvels of the material world, from the ground up.


From a lowly mixture of stone, sand, water, and cement have sprung sidewalks, streets, and skyscrapers, sturdy lighthouses and magnificent palaces, long bridges and massive dams. In ancient building practices, in modern engineering, and in the architecture of the future, humble concrete plays a mighty role in the creation of the human-made world. Brimming with facts and spiced with clever running narrative in the form of repartee-filled speech bubbles, Concrete is as intimate and entertaining as it is informative and visually sweeping. Curious readers of all ages—from would-be engineers to science and history buffs to retro-design lovers—will delight in this bold, one-of-a-kind guide to the (literal) bedrock of civilization, amplified by a bibliography in the back matter.
Larissa Theule is the author of several picture books for children, including Kafka and the Doll, illustrated by Rebecca Green, and A Way with Wild Things, illustrated by Sara Palacios. She holds an MEd from Gordon College and an MFA from Vermont College of Fine Arts and currently lives in Southern California.

Steve Light is the author-illustrator of many acclaimed books for children, including the picture books Have You Seen My Dragon? and Have You Seen My Monster? and the board books Black Bird Yellow Sun; Mama Tiger, Tiger Cub; and Up Cat Down Cat. Steve Light lives in New York City with his wife.
Without getting too bogged down in technical nitty-gritty, Theule presents readers with the fascinating story of concrete, from its ancient nonstructural uses to today’s massive feats of engineering. The brief, clear expository text delivers the information well (as readers learn, for instance, the difference between tensile strength and compressive strength), with additional details provided by conversational, often humorous word balloons from various figures found in the illustrations.
—The Horn Book (starred review)

This beautifully illustrated picture book takes a rather mundane topic and turns it into something mysterious, ancient, and unlimited.
—Booklist (starred review)

As unpretentious but essential as its subject, this is a marvelous book—an utterly compelling read. . . . The spare but lively ink and watercolor illustrations are a perfect match for the text: unassuming but amusing, rich in detail and meaning. . . this book will be read again and again.
—School Library Journal (starred review)

An eye-opening survey of this ubiquitous building material’s history and uses. . . . Lays down a foundation of basic knowledge as solid as its topic.
—Kirkus Reviews

Theule and Light whisk readers from the Göbekli Tepe to the Three Gorges Dam, the Berlin Wall, and beyond in this fascinating continent- and history-spanning introduction to concrete’s wonders. . . . A breezy, accessible tone keeps the heavy-duty subject feeling light.
—Publishers Weekly

Concrete: From the Ground Up is an informative and occasionally offbeat homage to a humble building material with enormous architectural implications. Larissa Theule (Kafka and the Doll) and Steve Light (Have You Seen My Dragon?) offer inquisitive readers historical context with amusing sidenotes . . . This is an accessible and entertaining explanation of an everyday resource readers might not otherwise think to examine, perfect for fans of David Macauley's work.
—Shelf Awareness

Illustrated in muted colors with cartoon-like characters who add historical and factual information, this book will keep readers engaged in learning about a mixture that most people have likely taken for granted.
—School Library Connection

This fun and informative book explores the long-but-interrupted history of one of the tougher substances around. . . . Theule’s explanations are clear and concise, while Steve Light’s illustrations are playful even when they’re showing off the solidity and magnitude of concrete creations.
—The Washington Post

In picture books, we’re all used to seeing animal pals and bedtime rhymes. We’re a great deal less used to seeing, say, building materials, which is one reason why Larissa Theule’s ‘Concrete: From the Ground Up’ is such a delight. Another reason is that it’s a terrific work of illustrated nonfiction—engaging and informative, with witty pictures by Steve Light.
—The Wall Street Journal

Calling all construction-obsessed young readers! This picture book takes a fairly mundane topic and breathes life into it. . . . Concrete is so ubiquitous, it’s easy not to think too much about it. But reading this beautifully-illustrated, informative picture book will change that for readers.
—Book Riot