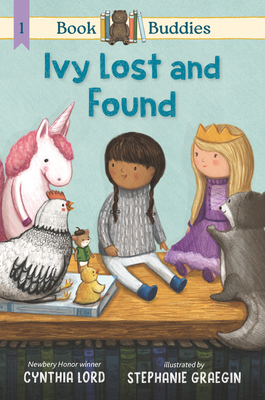 A lonely doll helps a child adjust to a blended family in the first of a charming series about library toys and the children who borrow them, written by Newbery Honoree Cynthia Lord.

Ivy was Anne the librarian’s doll when she was a young girl. But now she has moved to Anne’s library to be its newest Book Buddy—a toy that can be checked out just like a book. Ivy isn’t sure she wants to be borrowed, though. She’d rather go back to just being Anne’s favorite toy. Fern, a child who visits the library with her stepfamily, also wishes things could go back to the way they were, when Fern had her dad all to herself. When Fern takes Ivy home, an unexpected outdoor adventure helps both of them find confidence and belonging in their changing worlds. This heartwarming story by Cynthia Lord, with a classic feel and gentle illustrations by Stephanie Graegin, is the first in a chapter-book series that pairs friendly toys with child characters who need them.
Cynthia Lord is the author of award-winning middle-grade fiction titles such as the Newbery Honor book Rules, as well as Touch Blue, Half a Chance, A Handful of Stars, and Because of the Rabbit. She is also the author of the Hot Rod Hamster picture book and early reader series as well as the Shelter Pet Squad chapter book series. Cynthia Lord lives in Maine.

Stephanie Graegin is the author-illustrator of Little Fox in the Forest and the illustrator of many other picture books, including You Were the First by Patricia MacLachlan and Water in the Park by Emily Jenkins. Stephanie Graegin lives in Brooklyn.
An engaging story of insecurity overcome by hope, courage, and love. . . the simply written narrative and the pleasing artwork convey heartfelt emotions with honesty and subtlety.
—Booklist (starred review)

In this series opener, a long-forgotten doll is dismayed to find herself repurposed as a library toy for children to check out. . . . Like the story, the charmingly retro illustrations honor the genre’s antecedents, from Rumer Godden’s sentient dolls to the Toy Story franchise. . . . A beguiling series opener that gently conveys the upside of adapting to unwelcome changes.
—Kirkus Reviews

B&w sketchlike illustrations in Graegin’s signature style lighten the tone of a story that touches on fears of loss and abandonment. Humorous, lively conversations between the Book Buddies. . . offer the promise of happy borrowings ahead.
—Publishers Weekly