Archers, Alchemists: And 98 Other Medieval Jobs You Might Have Loved or Loathed (Jobs in History) (Hardcover) 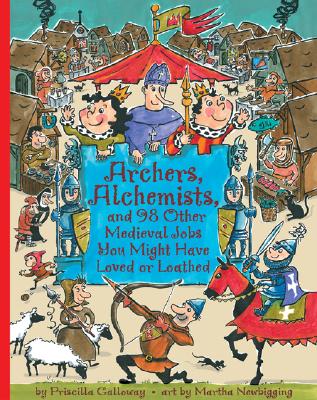 Archers, Alchemists: And 98 Other Medieval Jobs You Might Have Loved or Loathed (Jobs in History) (Hardcover)


NOT AVAILABLE
This book allows us to explore a popular fantasy. If we could go back in time to the Middle Ages, what would we want to be? A knight in shining armor? A princess in a silken gown? Most people's lives were far less glamorous but just as fascinating. Barbers cut off beards ... and sickly limbs; gong farmers cleaned out latrines ... and sorted through the excrement for dropped buttons or pennies. This fascinating and original guide presents 100 careers, described with historical accuracy and the author's renowned wit Sidebars expound on intriguing elements of medieval life, including the Bayeux Tapestry, Chaucer's Canterbury Tales, medieval cosmetics, and torture techniques The art provides the reader with further opportunities to have fun and learn.
Priscilla Galloway has held many careers herself, such as garbage collector, cucumber farmer, scuba diver, professor, and writer. She has written over 20 books, including "The Courtesan's Daughter," "Truly Grimm Tales," which was named a "YALSA Best Book for Young Adults," "Too Young to Fight," which won the "Bologna Ragazzi Award for YA" non-fiction, and the "Tales of Ancient Lands" series. Martha Newbigging is a graphic designer, film animator, web designer, and children's book illustrator. She is currently at work on an animated film.