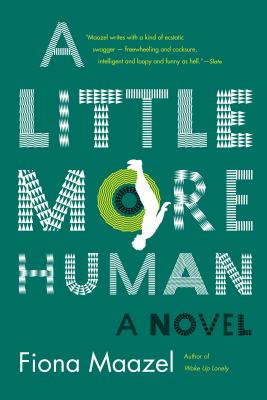 “A Little More Human kept me up way past my bedtime. Fiona Maazel's seamless novel draws you in subtly and irresistibly. I just had to know how Phil Snyder (nursing assistant, professional superhero impersonator, and actual mind-reader) ended up on a horse with splashes of blood on his clothes and no memory of how he got there. Uncovering secrets in snippets along with Phil reminded me of his own mind-reading talent and built the suspense beautifully page by page. Another clever literary masterpiece from Fiona Maazel!”
— Anna Thorn, Upshur Street Books, Washington, DC

A dazzling new novel from the author of the “weird, thrilling, and inimitable” Woke Up Lonely (Marie Claire)

Meet Phil Snyder: new father, nursing assistant at a cutting-edge biotech facility on Staten Island, and all-around decent guy. Trouble is, his life is falling apart. His wife has betrayed him, his job involves experimental surgeries with strange side effects, and his father is hiding early-onset dementia. Phil also has a special talent he doesn’t want to publicize—he’s a mind reader and moonlights as Brainstorm, a costumed superhero. But when Phil wakes up from a blackout drunk and is confronted with photos that seem to show him assaulting an unknown woman, even superpowers won’t help him. Try as he might, Phil can’t remember that night, and so, haunted by the need to know, he mind-reads his way through the lab techs at work, adoring fans at Toy Polloi, and anyone else who gets in his way, in an attempt to determine whether he’s capable of such violence. A Little More Human, rife with layers of paranoia and conspiracy, questions how well we really know ourselves, showcasing Fiona Maazel at her tragicomic, freewheeling best.

Fiona Maazel is the author of Last Last Chance and Woke Up Lonely. She is a winner of the Bard Prize for Fiction and a National Book Foundation 5 Under 35 honoree. She teaches at Brooklyn College, Columbia, New York University, and Princeton. She lives in Brooklyn.

“[Fiona Maazel is] a dazzling prose stylist with a gift for creating characters caught in extraordinary situations that defy credulity. Imagine a situation comedy written by Phillip K. Dick or a telenovela penned by Thomas Pynchon.”—Los Angeles Times

“Fiona Maazel’s prose is delightfully quirky, insanely amusing and impossible to put down: Once again, she knocks it out of the park with a tale that pulls no punches and looks the borders of genre square in the eyes before tearing it all down.”—Newsweek

“A tragicomic tale of an extraordinary schlub just trying to hold his life together.”—O, The Oprah Magazine

“Tempest-like plots are hatched and mysteries surface. Washing up in a boat graveyard is a body that newspapers call ‘the Swimmer.’ (To identify him, characters travel to Denmark, which gives the novel’s conspiracy a Pynchonian multinational quality.) The brain-damaged patients in the Snyder Center present the kind of cognitive idiosyncrasies reported by Oliver Sacks. . . . This is, in other words, an unquestionably brainy book.”—The New York Times Book Review

“This idiosyncratic thriller, set in Staten Island, is layered with secrets.”—The New Yorker

"[Fiona Maazel's] writing is bright and shiny, as fun to follow as that bouncing ball."—Star Tribune (Minneapolis)

“Maazel has rifled deftly through genres to create something in a class entirely by itself.”—The Millions

“[A] dazzling tragicomedy.. . . A Little More Human intelligently questions how much we really know ourselves.”—Chicago Review of Books

“Brooklyn novelist Maazel has always gone her own way, resulting in brilliant and bizarre books like Last Last Chance and Woke Up Lonely. Her latest novel follows a nursing assistant with a failing marriage and an intriguing second life: By night, he’s a mind-reading superhero, complete with costume, named Brainstorm.”— Men’s Journal

“Maazel’s willingness to bring in almost any subject and filter it through her characters gives the writing the exhilarating rush of a roller coaster.”—PopMatters

“A Little More Human, in its spiraling, fast-paced, witty prose, is stylistically reminiscent of the best of Vonnegut and Pynchon. . . . [Fiona Maazel] layers and constellates the conventions of science fiction, satire, noir, domestic drama, and the superhero narrative to create her own magnificent hybrid.”—Washington Independent Review of Books

“[A] humorous romp. . . . Recommended for Maazel fans, lovers of tragicomedy, and all who enjoy the absurd.”—Library Journal

“Maazel takes a dark, inventive look at the cost of pushing humans to their limits.”—Booklist

“Fiona Maazel is an explorer, a risk-taker, a mad scientist—an artist, in other words—and A Little More Human is her most brilliant and uncompromising novel yet. Take this book home and read it right away, preferably in your superhero suit.”—John Wray, author of The Lost Time Accidents

“Maazel is a brilliant acrobat, leading a reader to unimagined sights with humor, wonder and vibrant intelligence. Surefooted and powerful as DeLillo, Maazel lands it perfectly every time.”—Samantha Hunt, author of Mr. Splitfoot

“Listen, skip the blurbs and just buy the damn book. Fiona Maazel is one of the funniest and finest we've got.”—Sam Lipsyte

“The goal of most novelists is to hold, as 'twere, the mirror up to nature, but all too often their fastidious accuracy fails them. Their books don't recreate reality, they flatten it. Luckily, Fiona Maazel is not most novelists. She has the special ability to turn the reality dial up to eleven, blasting her readers past verisimilitude and into the rarefied air where they can feel what it means to live in our confusing modern world. . . . By the time Maazel's absurdist spin cycle is finished, your whites will be whiter and your colors will be brighter than they've ever been before. You'll never switch back to your old detergent again.”—James Crossley, Island Books, Mercer Island, WA

“A Little More Human reads like if you mixed Swamplandia! with DeLillo, and threw in some Doctor Jekyll and Mr. Hyde for good measure. This excerpt, to me, sums it up: “He pressed the pad of his finger into a grain of sugar, but when he touched it to his tongue, it was salt.” It's delightful, unexpected, and sobering at every turn.”—Will Walton, Avid Bookshop, Athens, GA

“Unstoppably captivating and clever! Maazel's latest novel artfully folds a twisted tale of lies, deceit, mind-reading, and consequences into a virtuosically zany medical dystopia. Whether you love or hate Phil, the story's duty-shucking Everyman protagonist, you'd better strap yourself in tight for a ride on Maazel's wild and artful prose, one that will leave you wondering if it's possible to truly know yourself, while still laughing aloud at every remarkable detail!”—Annie Harvieux, Magers & Quinn, Minneapolis, MN

“Fiona Maazel’s seamless novel draws you in subtly and irresistibly. I just had to know how Phil Snyder (nursing assistant, professional superhero impersonator, and actual mind-reader) ended up on a horse with no memory of how he got there and splashes of blood on his clothes. Uncovering secrets in snippets along with Phil reminded me of his own mind-reading talent and built the suspense beautifully page by page. Another literary, clever masterpiece from Fiona Maazel!”—Anna Thorn, Upshur St. Books, Washington, D.C.